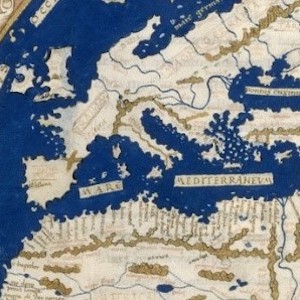 I use images of three historical maps for topics on colonial exploration and for interpreting historical evidence in undergraduate courses on history and historical methodology. I have several aims in using the maps. One is to study moments as well as change over time in Europeans’ conceptions of the world. Another aim is to show how maps, in the words of Joni Seeger in “Analyzing Maps” on this website, “reflect the priorities…of the mapmaker and his or her cultural context.” A third aim is to increase students’ awareness of how and why geographical knowledge is constructed. Analysis of historical maps invites students to ask why names and locations on world maps seem unfamiliar, and, likewise, whether modern maps would appear unfamiliar to people in the past. The primary sources referenced in this module can be viewed in the Primary Sources folder below. Click on the images or text for more information about the source.
This short teaching module includes historical context and guidance on introducing and discussing the three primary sources.