From John Bartholomew, Literary and historical atlas of America 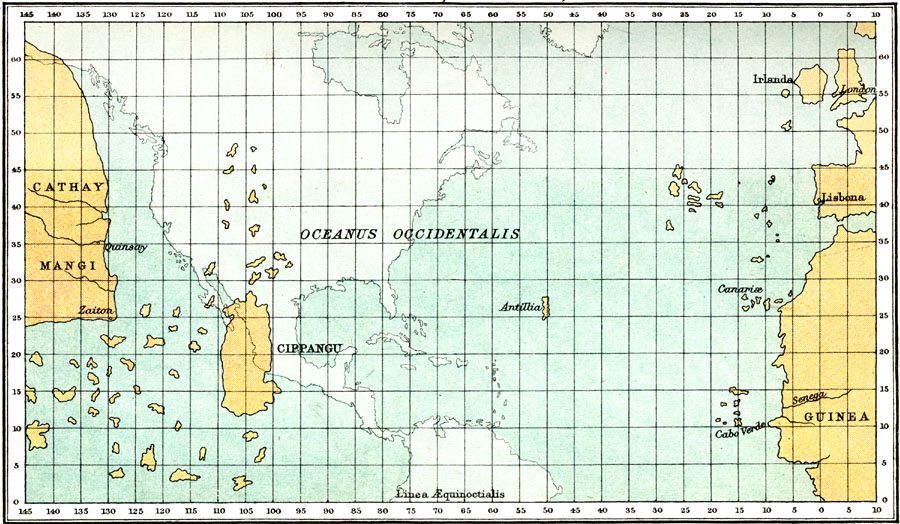 This unusual map appeared in a 1911 atlas of America by John George Bartholomew, a prestigious Scottish cartographer and geographer. In this map Bartholomew dramatized the provincialism of European cartography three centuries earlier. He did so by superimposing the Americas on a reconstruction of a 1474 map of Italian cartographer Paolo Toscanelli. Toscanelli, relying on information of Marco Polo, had estimated that Cathay, an historical European name for China, lay about half as far from Lisbon, Portugal - both places are prominent on the map – as modern cartographers have measured. And Toscanelli placed Cippangu, or Japan, some 1,500 miles east of mainland Asia. Toscanelli’s map had been lost by the sixteenth century, but Columbus likely carried it with him in 1492; his reliance on it caused him, initially, fail to realize he had found a new continent. An effect of Bartholomew’s retrospective map, showing both pre- and post-Columbian representations of the Atlantic Ocean, is to render nearly comical early modern Europeans’ mapping of the world from the perspective of a commerce-oriented ambition to sail westwards to reach the Spice Islands and Asia. Bartholomew’s map also suggests the emergence of America in the world - in the middle, yet not fully prominent.

This source is a part of the European Maps of the Early Modern World teaching module.

From John Bartholomew, Literary and historical atlas of America, 1911