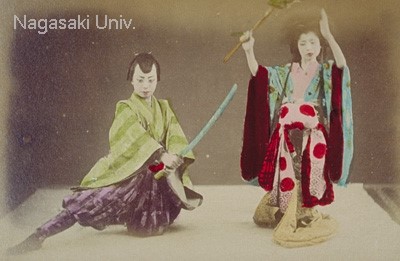 “The site will be useful to instructors looking to add visual sources to enliven a discussion of Japanese history at this critical moment in which Japan confronted the threat of Western imperialism and embarked on its own urgent project of modernization.”

This website displays the library’s collection of more than 5,000 hand-tinted photographs dating from the second half of the 19th century. These decades were among the most tumultuous and significant in Japan’s history, as they marked Japan’s confrontation with Western imperialism, the overthrow of the feudal Tokugawa regime in 1868, and the rapid formation of a modern nation-state. This period coincided with developments in photographic technology. When Western diplomats, missionaries, and merchants came to Japan in the late nineteenth century, they often brought their cameras with them. Several Japanese also learned photographic techniques and began taking pictures of their own. Nagasaki University’s collection represents a large sample of the photographs taken during this era.

The site is very straightforward. It consists simply of the photographs themselves, with no commentary beyond the brief captions that accompany each picture. The photographs are searchable by keyword, geographical area, and shelf number. The keyword search is the most useful method of exploring the collection. In this search mode, one can choose from among 86 keywords (such as “shrine,” “mountain,” “hotel,” and so on). Each keyword connects to a list of all the photographs in the database relating to that word; one can click on the thumbnail-sized photos in the list to access a full-sized picture (although the “full-sized” pictures are only about two or three square inches).

The database contains many landscape photographs, but also contains hundreds of pictures of Japanese people—some in their “natural” setting, and others positioned strategically by the photographer. One will find pictures, for example, of farmers planting rice, a blind beggar on a city street, and three awkwardly posed samurai in full armor. Most of the staged pictures are of Japanese women, particularly geisha (this was a favorite subject of the Western photographers whose work is displayed on the site). We see women playing musical instruments, dancing, serving tea, or otherwise engaged in the realms of domestic work or entertainment.

The site will be useful to instructors looking to add visual sources to enliven a discussion of Japanese history at this critical moment in which Japan confronted the threat of Western imperialism and embarked on its own urgent project of modernization. The site might also be of interest to art historians, who could use the site to demonstrate how the subject matter chosen by early Japanese photographers—famous sites, city streets, prostitutes—was virtually identical to that of the woodblock prints (ukiyo-e) of the 18th and 19th centuries. Finally, instructors could use the pictures taken by Western photographers to add a visual dimension to a discussion of Orientalism. The Japan they depict through these photographs is one that stands in clear contrast to the self-image of 19th-century Europe. The photographs construct an exotic Japan, full of shrines, pagodas, rice paddies, and other images that signified opposition to the modern, rational West. The disproportionate focus of these photographers on women is, of course, consistent with this theme, and also reveals that this exotic Orient was represented as feminine in essence.

One major drawback to the site: the photographs are rather small. Attempts to enlarge the photos for classroom use—for example, in a PowerPoint presentation—result in unacceptably low clarity. Consequently, instructors may find it more useful to have students explore the site using their own computers and view the photos on their own monitors.