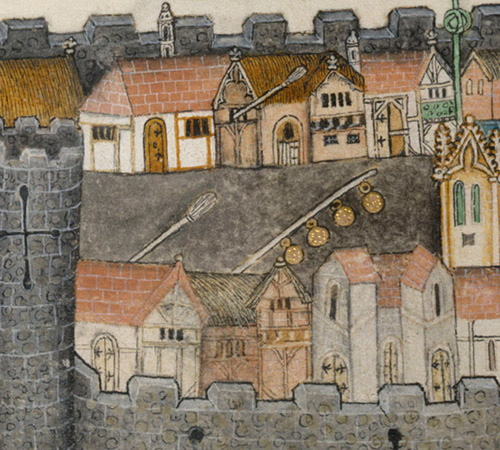 “Inspired by the medieval concept of a textual anthology illuminating specific topics, Florilegium Urbanum allows the user to explore more than 200 short sources and excerpts from longer texts dealing with medieval English towns.”

Inspired by the medieval concept of a textual anthology illuminating specific topics, Florilegium Urbanum allows the user to explore more than 200 short sources and excerpts from longer texts dealing with medieval English towns. The sources are translated into readable modern English (in the majority of cases by site author Stephen Alsford) from Latin, French, or Middle English. Most excerpts are from later medieval texts (14th and 15th centuries), but some are earlier. For example, see Henry I’s 12th-century charter for London. Each translation is presented on its own page, accompanied by original edition information, a discussion of historical context, and explanations of hyperlinked words or phrases contained in the passage. Thus, the site presents a series of commented texts or text excerpts, and differs in this respect from full-text sites such as the Online Medieval and Classical Library (OMACL), The Online Reference Book (ORB) for Medieval Studies, or the University of Virginia’s Electronic Text Center.

Florilegium Urbanum functions as the source component of Alsford’s larger site on “Medieval English Towns.” This site in turn seems to have begun as an outgrowth of Alsford’s masters thesis on urban office-holding in late medieval East Anglia. Alsford’s stated goal in authoring the Florilegium “is not simply to put online a set of primary documents . . . but to provide a richer understanding of medieval English towns and townspeople by presenting extracts from medieval records in a framework of commentary and explanation that will . . . give readers better insight into the character, perspectives, and preoccupations of urban society.”

Florilegium is organized into six components. The first, a prologue, sets forth site goals and editing conventions for the site. Next, an introduction presents views of English towns from three medieval perspectives. Two are descriptions of London which date to the 12th century: an unfavorable account of city life composed by the Winchester monk Richard de Devizes, and a more optimistic view by Thomas Becket’s biographer William FitzStephen. An anonymous late medieval Italian account rounds out these introductory primary sources.

The remaining sections deal respectively with four aspects of town life: community, economy, government, and lifecycle. Each of these in turn is divided into subsections framed by substantial introductory essays (ranging in length from approximately 2,000 to 12,000 words) and brief but usually up-to-date bibliographies of academic print works (only occasionally including online references. Another part of the main site provides more than 150 external links).

The site author’s background in medieval history and in museum research and museology is reflected in the site layout and conceptual design as a collection of commented texts. However, Florilegium does not always mesh seamlessly with useful materials on the main Medieval English Towns site: the user can easily miss components such as individual town sources, biographical sketches for citizens of Lynn, and a glossary on the parent site.

For teaching and learning purposes, this website can be put to good use as an effective and attractive primary-source reader for any study of medieval city life. Because it is offered as an anthology rather than an extensive database or large collection of full-text sources, this site perhaps does not lend itself to research projects based on searches for particular terms, motifs, or types of data.

On the other hand, instructors wishing to teach their students how to read a primary source will find Florilegium a valuable site indeed. The commentary and annotations that accompany each source clearly model for students the need to investigate the historical context of individual sources, and the sensible organization of sources into main categories and subtopics remind students to attempt a judgment about type categorization of sources they encounter elsewhere in their study of history.