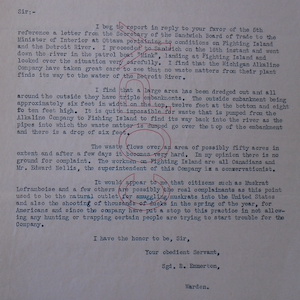 World historians sometimes work within a single sub-field, such as migration history or gender history, but they can also bring sub-fields together, as their perspectives, methods, and subject matter cross boundaries. In this essay, Meredith Denning discusses how her work brings together environmental and diplomatic history to better understand how humans’ perception of environmental change affects policies and practices across national borders. Specifically, Denning examines water resource management of North America's Great Lakes region and analyzes the "overlapping jurisdictions and people whose actions affect multiple levels of politics, ecology, economy, and society.

When I frame a research question, one of the first things I do is define my parameters: time, place and thematic focus. Choosing to approach a subject as transnational or national is part of the thematic focus. In my view, national boundaries are best approached as human creations superimposed on physical geography. The historical meaning of a boundary can vary enormously depending on the topic: a 'hard' boundary that reliably includes or excludes one thing (ex., nuclear weapons installations), may be completely porous and irrelevant when trying to understand the movements of something else (ex., fish, volcanic ash). A border can itself be the focus of historical inquiry if the topic is something like migrant labour or fishing disputes.

So, how did I decide to frame my work as transnational, encompassing Canada, the United States, Mexico and the British Empire, and also trans-field, at the intersection of environmental and diplomatic history? Basically, there is no way to address my questions without a transnational approach. I am trying to understand how people have tried to manage the North American Great Lakes during the recent past, in particular how joint management institutions emerged and evolved over time, both in response to the changing aquatic environment and in response to people’s changing goals. For example, how and when did people start trying to control pollution in the waterways along the border? My research suggests that it began earlier than in most parts of North American because the impact of rapid industrialization was so enormous.

One of the most interesting parts of my work is to understand how people living in a shared spaces conceive of their environment. People living around the lower Great Lakes share a lot that isn't captured at the level of national discourse. They are vulnerable to similar problems (eutrophication, weather, climate change impacts) and they have compelling reasons to collaborate. For example, a shared vision of economic growth prompted Americans and Canadians to build bridges and canals together beginning in the 1920s, which was cheaper and faster than building two sets of infrastructure. Many other joint ventures were responses to problems. In one case, people living along the shores of Lake Erie and Lake Ontario in the early twentieth century noticed the last of the lake salmon disappearing and witnessed wild fluctuations in other fish populations as commercial fishing intensified. They tried several times to create a set of sustainable fishing regulations, a shared concern based on where they lived and worked, not their nationalities.

I have become convinced that in the case of the Great Lakes, ideas and momentum for water management nearly always originated in the watershed. The shared experience of living with the changing lakes, experiencing the industrial development of the shorelines and its impact on the ecosystem and on human quality of life, prompted residents to press their governments to cooperate to remedy some of the acute pollution problems and to create transboundary institutions for ongoing work on those problems. Their perceptions of environmental change were shared without much reference to the national boundary and only some reference to state/provincial boundaries.

Capturing many layers of transboundary relationships

I often describe the political landscape that I study as a three-dimensional patchwork. It is multi-layered and complex, full of overlapping jurisdictions and people whose actions affect multiple levels of politics, ecology, economy, and society. While national boundaries are important to my work, studying a single country would not be practical. Even when I narrow my lens down to focus on the lower North American Great Lakes, it is necessary to study the United States and Canada simultaneously, while also keeping in mind the British Empire and Mexico. Also, in federal countries like the USA, Canada, and Mexico, the nation is not always the most relevant jurisdiction when trying to understand how people get organized to address a problem. States, provinces, counties, townships, cities can all be important actors. A topic is 'transboundary' when it moves between the levels of government from local to state to federal, as well as between countries. To capture these many layers, I draw upon methodology and secondary literature from the field of diplomatic history.

Diplomatic history is an old field, beautifully detailed as a result of its exceptionally rich source material. War, peace, treaties and alliances have always been understood as important by both contemporary actors and historians, and many of the people involved in decision-making were literate, privileged members of society whose papers were preserved. However, the shelves of history books detailing the relationships between Prime Ministers and Secretaries of State can obscure a deeper truth: no office-holder in Ottawa or Washington, DC ever woke up one morning and said, “I think we need a treaty to manage the Great Lakes!” Both the root causes and the long-term impact of diplomatic decisions are more subtle and wide-ranging than is generally appreciated. Nation-states are not always the only or even the most important jurisdictions. Informal discussions, professional associations, simultaneous but separate regulations, cultural consensus, and diminutively named agreements between provinces and states; these are all important tools that transcend boundaries to manage shared environments. In order to answer my questions, I practice an inclusive, broadly defined sort of diplomatic history that only sometimes focuses on the usual suspects and includes a number of actors that can only be understood through environmental history: water levels, pollutants, invasive sea lampreys, and other non-human agents.

Though it is rarely characterized as a form of environmental management, transboundary economic activity shapes water use profoundly. Multi-national companies, professional organizations, unions, chambers of commerce, and banking institutions are all important to cooperative use of a shared space or resources. It is essential to understand these organizations, as well as labour, trade flows, property ownership, liability, and the links between the economy being studied and the rest of the world. I find the concept of 'commodity chains' to be useful in tracing the connections between physical goods, the people using or extracting them, and their links to larger social or cultural changes. It originated with histories of tropical commodities in South and Central America such as coffee, cocoa and bananas, but it is a usefully holistic frame for other economic histories, too.

Ecology and economics share a root word, the Greek, ‘oikos' which refers to ‘house’ or ‘home.’ Humans’ understanding of their space is deeply shaped by how they earn their livings and how they experience their surroundings. There is a robust theoretical literature that explores embodied experience and sensory knowledge, which is important to this aspect of my research. Fish, pollutants, water, smells and tastes - they all cross borders without much regard for the lines on the maps. To explain how these tangible things shape people’s ideas about how to govern their shared ecosystem, I practice transnational environmental and economic history.

Around the Great Lakes in the twentieth century, many people experienced profound and lasting changes in their home environments, which shaped their ideas about how the lakes should be governed. In some cases, perceived damage to cherished living space and livelihoods, perceived health risks, and species loss led people to create cooperative mechanisms to try to improve environmental quality. Sometimes they were successful, and precisely when and how success was achieved is very interesting. Sometimes they seemed to fail, but the information or connections created became useful to later collaboration. Rather like recycling or ecological succession, where layers of dead organisms that eventually form soil in which larger plant can grow, waste products sometimes became crucial material for later, more complex growth.

Between 1919 and 1935, citizens of the U.S. and Canada complained about industrial pollution from an American company called the Solvay Process Company (also called the Michigan Alkali Corporation), which dumped its wastes on Fighting Island, in the Detroit River. The island is in the United States, but the boundary line runs past it through the Detroit River. Until the mid-1920s, the island’s eastern side was bounded by Canadian marshes that were highly valued as bird and fish habitat by recreational sportsmen, professional hunters and fishermen, and conservationists. In 1926, the pollution on Fighting Island was framed as an international problem for the first time. Local Canadian activists mobilized their Member of Parliament and also contacted the federal Minister for the Interior. The activists were a businessmen’s group from the Ontario side, complaining that pollution from the Michigan Alkali Company was driving valuable fish and game away from the Detroit River around Fighting Island. American officials had been raising similar concerns about other points along the boundary, and the transnational nature of the pollution prompted Canadian federal ministers write to their counterparts in Ontario, asking for an inspection and reminding them that there had been complaints in 1922. The provincial Department of Game and Fisheries again agreed to make an inspection. It is clear that the existing procedures for assessing environmental impact were totally inadequate to detect the environmental changes that people in the watershed were noticing, even when the machinery of the state was engaged to investigate. An extremely simple and unscientific personal visit seems to have been the best inspection that any level of government was willing or able to execute.

The 1926 inspection was carried out by the Game Warden for the Essex area, a Mr. B. Emmerton, who reported directly to Mr. McDonald, the Deputy Minister for Game and Fisheries for Ontario. His report, a single page of typescript, written in the first person, was accepted and referenced as the sole official Canadian account of the pollution problem at Fighting Island until the 1950s. Emmerton described the company’s waste dump and asserted none of it could be getting into the river, without explaining how he arrived at that reassuring conclusion or supporting it in any way. He went on to note that the workmen were all Canadian and that the superintendent of the company was a conservationist, presumably as further evidence that the American company’s activities would not harm Canada. Warden Emmerton’s report ends with his opinion about why the complaints had appeared, which gives the reader several clues about his attitude to the complainants and the chemical company. He was clearly suspicious of the people complaining, and linked their concerns to the smuggling problems that were presumably a familiar part of his job. This source is a part of the Transnational Water Management around the Great Lakes teaching module.

Meredith Denning holds a PhD from Georgetown University, supervised by one of the world’s leading environmental historians. She is an expert on Canadian-American relations, past and present, with deep knowledge of the Great Lakes from both sides of the border.