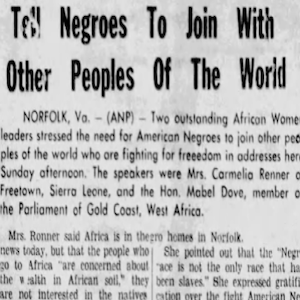 Studying transnational histories of solidarity among women of African descent reveals new dimensions of global political and social movements through the intersection of race and gender. Where nationalist narratives of progress acknowledge Black women’s various challenges to social, political, and economic oppression, this framing often obscures the connections people made between their experiences at home and those of global communities abroad. Approaches to recovering these historical connections include biography, attending to local activism as well as overlapping movement building. In these spaces, the activities, ideas, and networks they established across borders offers a more expansive understanding of collective challenges to interlocking systems of global oppression.