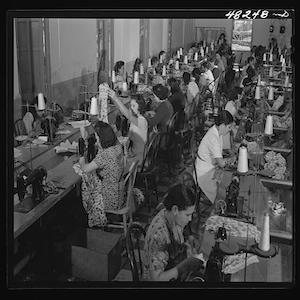 Starting at the turn of the twentieth century, U.S. and insular government offices and textile and garment businesses incorporated women of the New South and Puerto Rico into manufacturing in distinct yet interrelated ways. Despite these complexities, Crystal Lee Sutton, a mill hand and union member in North Carolina, became the focus of media attention in the early 1970s. She was the basis for the movie Norma Rae (1979). Instead of itemizing the film’s inaccuracies, this module describes how to study the larger historical context, analyze why and how a particular popular culture television show or movie was made, and why it erased or highlighted certain people or details.