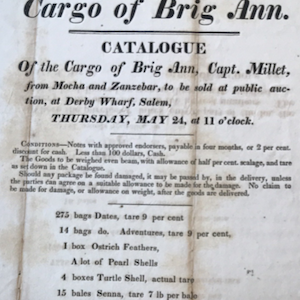 Although American merchants often fade from historical narratives after the eighteenth century, they remained influential actors in the United States and abroad. As western expansion and industrialization reshaped the nation’s economy, American traders dispatched voyages around the world in search of new opportunities. During the 1820s, businessmen from Salem, Massachusetts reached the island of Zanzibar. Over time, Americans successfully integrated themselves into the island’s thriving economy, developing close relationships with established Indian and Omani merchants. Through innumerable negotiations, these men co-created a highly practical and profitable commercial system that melded key aspects of Atlantic and Indian Ocean commercial practices. In the process, they linked the trajectories of New England and the Western Indian Ocean for over fifty years.