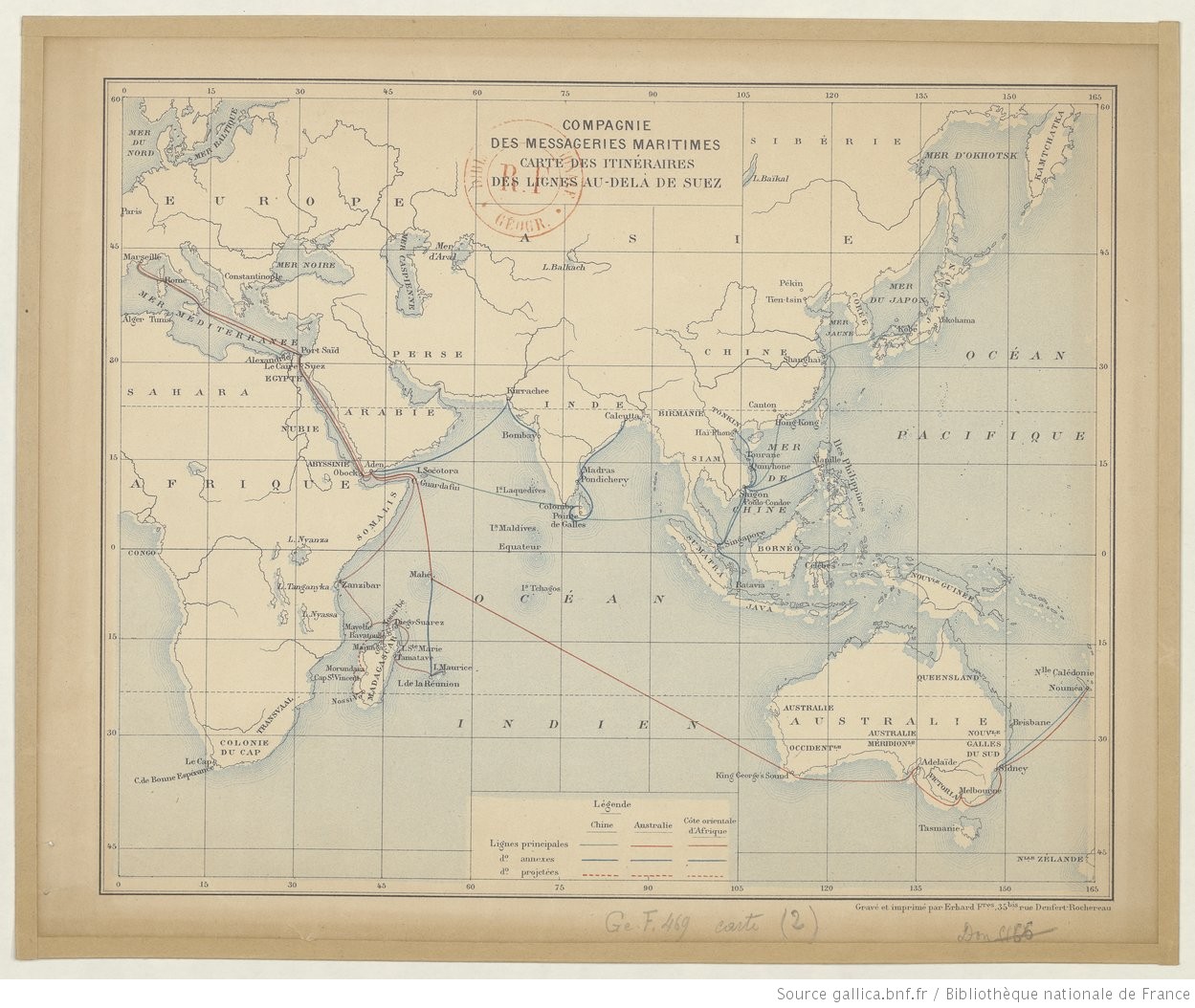 This route-map of the Messageries Maritimes shipping company displays the main routes connecting metropolitan France to its empire in the Indo-Pacific. While the map dates to 1889, these routes retained their basic structure through the 1950s. Classified by contemporaries as the routes “beyond Suez” (au-delà de Suez, in French; a parallel of the British referent, “east of Suez”), I prefer to call them Trans-Suez routes, which echoes the more familiar geographical referent, Trans-Atlantic. These Trans-Suez highways crossed the Mediterranean, passing through the Suez Canal, down the Red Sea, and around the Horn of Africa, before splitting in three directions: to East Asia, Australia and the South Pacific, or Southern Africa. Of course, such routes were reversible by definition, and might be better understood as paths connecting the Mediterranean, Red Sea, Indian Ocean, South China Sea, Sea of Japan, and the Pacific Ocean. Finally, such routes were, in another sense, constellations of port cities where layovers took place. Along the so-called “China Line,” (pictured in blue) for instance, ships generally stopped at Naples, Port-Said, Aden or Djibouti, Bombay or Colombo, Singapore, Saigon, Hong Kong, Shanghai, Kobe, and Yokohama, before doing it all again in reverse – a trans-imperial voyage that required roughly forty days in each direction throughout the late-19th and early-20th centuries.

Trans-Suez routes of the Messageries tracked French imperial expansion from the 1850s-forward. Privately owned, but subcontracted by the French government, the company’s ships carried troops, state personnel, postal service, commercial and government cargo, tourists, and migrants. They provided critical maritime infrastructure for the French Empire, allowing it to expand as far as it did, and to survive in times of crisis. At the same time, the routes pictured here should not be considered solely as French property. Their viability depended to a great extent on the coal depots, workers, port facilities, and passengers of foreign powers.