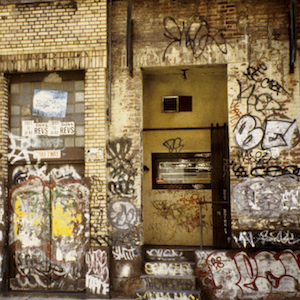 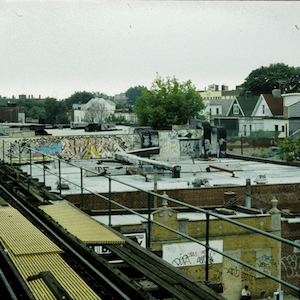 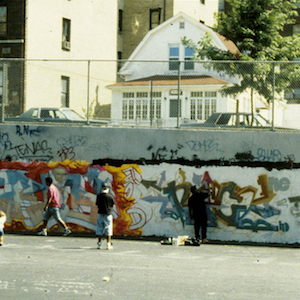 I use "graffiti art" – the unmediated writings, paintings, and drawings that began to appear in public spaces in New York, Philadelphia, and elsewhere on the east coast during late 1960s – in order to examine the: status of young people as valid historical actors and "citizens" relative to adults; changing access of young people to shared public spaces; gendering practices within youth cultures across time; changes in interpretation and use of commercial popular culture across time; and youth culture in the post-1960s era. Drawing upon their own recent historical experiences in their analyses of graffiti provides historians with further insight into the perspectives of youth. The primary sources referenced in this module can be viewed in the Primary Sources folder below. Click on the images or text for more information about the source.

This short teaching module includes broad guidance on activities, discussion, and the incorporation of the three primary sources.

From left to right, this photograph shows four graffiti artists at work on a collaborative "production" in a Bronx schoolyard: DEATH, NIC 1, MEX, and NOX. A "production" is a planned, multi-artist work typically unified by a visual theme in the background that is usually painted last, after each artist has finished with their name. The artist who organized this production whitewashed the wall the evening before, and for this production, also produced official-looking (but false) documents with signatures stating that the artist had the school principal's permission to paint. The documents were enough to convince three separate police squads that drove into the yard during the seven-hour painting event.

Although some artists sketch their works on paper before executing them on a wall, most improvise on the spot unless the work is accompanied by "characters" (figures, often borrowed from popular culture sources like movies and comic books). A sketch of a "Karate Kid" character can be seen on the far left work, near the fellow in the red shirt. Also, the sketch and fill-in process of creating larger pieces is evident in the two works-in-progress on the left (DEATH and NIC 1). Note that the production is a social event, with friends and admirers (and their children) watching, and a boom box playing music.

Why I Taught the Source
It is particularly difficult to document the historical experience of young people from their own perspective. Adults (parents, relatives, religious leaders, coaches, teachers etc. – including professors like me) frequently elicit primary source evidence of all sorts from young people (in the forms of tests, poems, drawings, sports performances, purchases, clothing ensembles, art, room decoration, etc.) as part of their everyday socialization and training. How can historians write history in the words of teenagers, for instance, when the historical documents most readily available are frequently the outcome of tasks designed, initiated, overseen, and evaluated by adults?

I use "graffiti art" – the unmediated writings, paintings, and drawings that began to appear in public spaces in New York, Philadelphia, and elsewhere on the east coast during late 1960s – in order to examine the: status of young people as valid historical actors and "citizens" relative to adults; changing access of young people to shared public spaces; gendering practices within youth cultures across time; changes in interpretation and use of commercial popular culture across time; and youth culture in the post-1960s era. Drawing upon their own recent historical experiences in their analyses of graffiti provides historians with further insight into the perspectives of youth.

How I Introduce the Source
I introduce graffiti art as a primary source after midterm, which is generally given over to the period after the 1940s – an era of the "teenager" as well as recurring moral panics about the "the younger generation" (especially in regard to social reproduction in a mass society). In my history of youth course, students will have analyzed other sorts of visual texts produced by and for young people and will have examined other conflicts around "autonomy" and age. The section immediately prior to our consideration of graffiti covered the counterculture and the era of the "hippie" through an investigation of psychedelic posters, which have some interesting overlaps with graffiti writing. The experience of mostly white middle-class beats and hippies making a cultural and social place for themselves in particular neighborhoods in post-WWII U.S. central cities, makes a nice comparison with the experiences of young immigrants and youth of color in other neighborhoods. This background provides the opportunity to discuss social class and urban location as well as cultural borrowing and innovation.

Having set up the major institutional frameworks for socializing and policing young before 1940 (via families and peer groups; schools and colleges; common workplaces; the consumer marketplace; popular culture for and about young people), I place emphasis on the ways in which young people within this framework lived as historical actors in the period after 1940. One of my main goals is to push students to critically examine their own historical experiences as young people, and then use this as one way of gaining partial insight into the historical experiences of others, including their relatives and adult acquaintances. In my American history survey class, I use graffiti art to talk about youth culture after the 1960s, the emergence of hip-hop and its relationship to events and trends in US central cities in that period, and the consumer relationships between youth cultures and commercial culture products, like music, clubbing, and clothing.

Reading the Source
There is a wealth of accessible sources on graffiti art including photographs that are available on the web and in print as well as a couple of great documentaries that cover the entire history of graffiti. Moreover, graffiti writers since the mid 1980s have been producing subcultural media of their own (dvds, websites, and magazines). Early examples of these media are difficult to come by, but current examples are available in hip-hop shops and alternative bookstores in most large cities around the world; your students might also volunteer copies. I direct my students to spend 30 minutes before class viewing a set selection on particular websites (including some of my own documentary photos on library electronic reserve), selecting two that interest them most, forwarding them to me, and bringing a copy to class (print it out, bring a laptop, download to a memory stick, etc.) Readings about the history of graffiti are assigned in the youth culture class; I stick to the textbook in the survey class.

Guided by a few questions from me I ask students to discuss the photos they chose with others in their small group. In the youth history class, the questions I raise are tailored or comparative versions of general course themes. In the American survey class, I ask them to think about:

After concluding the small groups, I open the discussion to the entire class using a general Socratic method. My intent is to push the students towards locating graffiti art in a larger set of contexts about youth, social hierarchies, and history. Ideally, this takes up about one third of the class time. I then ask the students for examples of evidence (usually images) that interested them the most and add these to a small set of the images I selected. The class and I work collectively in analyzing and contextualizing this particular evidence, with some opportunity for students to direct the inquiry themselves.

I have included four of the images I commonly use. To demonstrate my method of inquiry in class, here are the kinds of questions I ask in a comparison of two images ("Bronx Schoolyard" and "Tags and Throws").

Reflections
In the history of youth class, I will have spent considerable effort helping students examine 2-D objects as well as film and pubic spaces by this time in the semester. In the American survey course, this assignment is one of six that focuses on primary documents and methods of historical analysis. Both classes are asked to hone, adapt, and exercise skills that we've developed earlier in the course in order to comprehend the importance of everyday historical experience (including their own) in understanding social phenomenon.

Graffiti art seems to occasionally incite hot debate, particularly over the relative values and changes of individual and group rights to the city, private property, and commonly shared public spaces. Since these are also matters of concern (and moral instruction) assigned to educational socialization, some students may expect the instructor to "uphold the law" when discussing property and its uses. I find that the method commonly practiced in the humanities and social sciences, of asking students to withhold moral judgment from their own culture in order to gain a better understanding of others, to be among the most difficult tasks for some students.

Joe Austin is an Associate Professor and Graduate Director at the University of Wisconsin-Milwaukee. He received his PhD in American Studies from the University of Minnesota, Twin Cities in 1996, and currently is interested in the History of Youth and Adolescence, US 20th century Urban History, and Visual and Print Cultures. His teaching areas include Modern Studies, Intellectual History, and Social/Cultural Theory, Popular Culture, US Cities, and Youth and Youth Cultures.