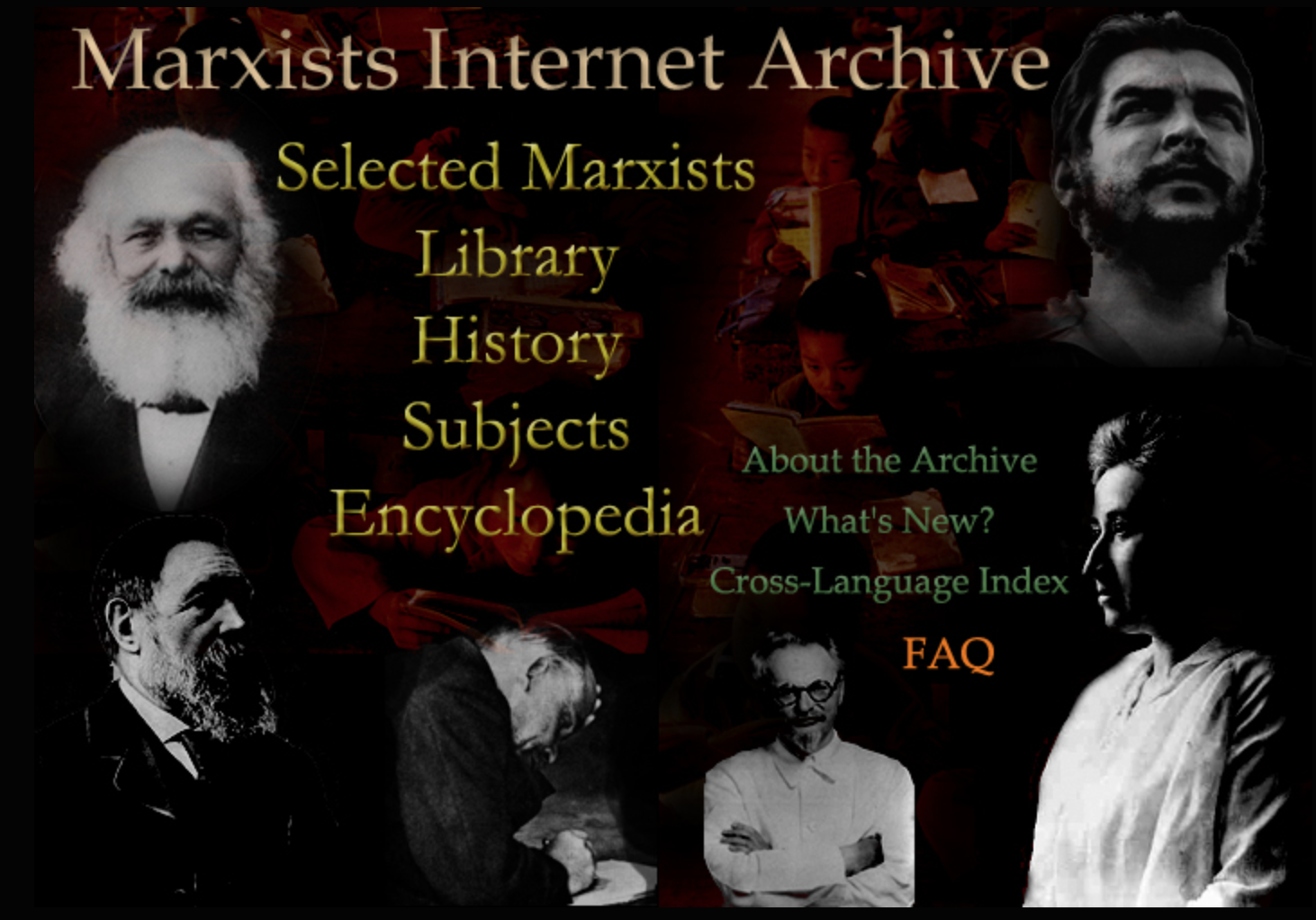 “Because the Archive offers such a wide-ranging set of sources from the Marxist tradition, students can be encouraged to explore cross-cultural comparisons.”

The Marxists Internet Archive is one of the oldest collaborative archive projects on the Internet, beginning in 1987 as an effort to distribute Marxist information on ARAPNET and migrating to the Web in 1993. Originally the Marx-Engels Internet Archive, the project now encompasses the work of more than 300 authors in 30 languages and includes tens of thousands of pages of text, more than 500 images, and dozens of audio files. As such, it is the most comprehensive library of Marxist thought available online. Because Marxist ideology has been so important to world history, especially in the 20th century, many of the sources found here are essential to a complete understanding of the Cold War and anticolonial and liberation movements in the developing world.

At the heart of the collection are the complete writings of Marx and Engels in both English and Chinese. More than 1,000 primary sources are available in this collection, including published texts, letters, journalistic writings, and many images from the lives of each man. Other collections are more selective. Two useful examples of other prominent Marxists whose life and work students can explore here are Mao and Che Guevara. The Mao collection in English contains hundreds of texts (including the Little Red Book), ten photographs, and links to other major off-site collections, such as Stefan Landsberger’s collection of Chinese Communist propaganda posters . The Che Guevara collection offers 15 texts, 6 images, and 3 audio files, including selections from a speech given at the U.N. General Assembly on December 11, 1964 (with simultaneous translation). Ho Chi-Minh also receives considerable treatment, with 40 texts and three images.

Material in the collection is organized under several rubrics, all of which are searchable by keyword. The Marxist Writers section presents more than 300 writers, organized chronologically or by name. There is a biographical sketch of at least 250-500 words for each author; the sketches are longer for more prominent authors. Not all of the writers here are Marxists, a fact that will need to be made clear to students. Charles Darwin is included because his work influenced Marxist writers, not because he was a Marxist. The Subject Archive offers explanations of difficult topics such as “alienation” and “historical materialism.” The “students’ section” of this part of the Archive presents a more student-oriented explanation of the basics of Marxist thought and history, but with a decided slant toward the promotion of the ideas presented. For teachers, one of the most useful sections is the History of Marxism section, which presents great moments in the history of Marxism—the Paris Commune, the Soviet Union, the Cuban Revolution—told through the primary sources available in the collection. Finally, an Encyclopedia of Marxism offers students an interface they are familiar with and allows them the opportunity to search for one- or two-paragraph answers to questions they may have.

Because the Archive offers such a wide-ranging set of sources from the Marxist tradition, students can be encouraged to explore cross-cultural comparisons. For instance, how did Asian Marxists describe European colonialism as compared to European Marxists, or those in Latin America? Students also can be challenged to consider the biased nature of the presentation of the material on this site. The intention of the authors’ collective that runs the Archive is to propagate Marxist thought to the widest possible audience, which even a casual reader will notice. Do the politics of the authors’ collective influence the content of the collection? Why so much Lenin and so little Trotsky, so much Stalin and so little Tito? Are these differences in coverage the result of ideological wrangling among the members of the collective, or are they simply questions of the availability of material? Reading the history of the Archive itself sheds at least some light on these issues and can be a way to introduce students to the (still) intensely ideological nature of Marxist milieu.

While the Archive provides a full-text search of every document and image caption in the collection, the interface is not especially user friendly. A search on “Paraguay” returned 19 hits, the first of which was an essay by Karl Kautsky from 1907 on the relationship between socialism and colonialism. None of the hits was a source actually produced in Paraguay. Similarly, a search on “Shining Path” returned more than 1,000 hits—none of which was a reference to the Peruvian Maoist insurgency. As a result, students will need help using the search feature. For example, a student interested in the revolutions of 1848 in Europe could search in the Marx/Engels collection using “Prague” as the keyword and would return only 67 hits, several of which are articles written by Marx for the Neue Rheinische Zeitung on the events in Prague in June 1848. A similar search using “Frankfort” returns 61 hits, including many similarly useful primary sources. However, students will need to know that these two cities were important locations during 1848 if they are to execute successful searches such as these.