Southeast Asia in the Ming Shi-lu

Southeast Asia in the Ming Shi-lu is an open access database tracing the history of Southeast Asia through the Veritable Records of the Ming Dynasty, one of the richest and most comprehensive sources of Asian history as compiled by the historians of one of the most successful and long-lived Chinese dynasties. A painstaking labour of love produced by historian Geoff Wade, it features English translations of every mention of Southeast Asian polities active from 1368 to 1644, during the reign of successive Ming emperors.

Originally released in 2005, the website is primarily built on a simple text-based database that strives to provide visitors with their desired information as efficiently as possible. In ‘About this source’, there are links to Geoff Wade’s acknowledgements for the digitisation project, a guide to the Ming Shi-lu as a historical source in the form of a 37 page essay (available as a PDF), a user’s guide to the database, a glossary of standard terms used across the annals, a guide to the Southeast Asian entities mentioned in the Ming shi-lu and a short overview about each of them, a bibliography linking visitors to scholarly texts they can consult if they would like to learn more, and a comments page that unfortunately has not been updated since 2005. The rest of the sections as laid out in the toolbar relate to browsing the annals themselves with visitors given the option to browse by year (denominated along the Gregorian calendar), by each emperor in the Ming Dynasty’s reign, by place names (which include geographic locations and natural landmarks alongside polities), and by individuals identified from the annals. Alongside browsing the long list of entries, visitors can also of course use the search bar provided to find what they’re looking for via keyword search.

Wade’s efforts in recovering the history of Southeast Asia from Chinese records is no easy feat, drawing only the relevant information from nearly 40,000 manuscript pages of unpunctuated text and translating them into English from Traditional Mandarin, a distinctly more complex language of ideographic characters that far surpasses the number of characters in the now more commonly used and taught Simplified Mandarin. Each entry includes full English translations of the records compiled by Ming-era historians on a particular date, which is also provided in both the original Chinese formulation on the basis of the year, month, and day since the beginning of each emperor’s reign as well as its corresponding date in the Gregorian calendar. In addition, each entry also provides a reference to the original entry in the 133 volume Academia Sinica edition of the Ming Shi-lu from which all of the database is derived. Handily for researchers and students writing essays, there is also a preferred form of citation for each entry which makes referencing the text that much easier.

With regards to the classroom, there are a myriad ways to use the database though there are some caveats to keep in mind. Some background knowledge or preparation is necessary as the Ming Shi-lu chronicles a time of great upheaval with territorial boundaries shifting in response to the rise and fall of various empires and polities and refers to polities only by the name by which they were known to the Ming. This means that educators—and perhaps students in more advanced settings—will need to do some additional research to figure out the polities being referred to and their relationship with modern Southeast Asian nation-states. With that in mind, one great way to use the database is to get students to trace the evolution of various Southeast Asian polities during the reign of the Ming. Alternately, teachers can assign a series of texts relating to the tributary system which underpinned the Chinese World Order to demonstrate the intricate relationship the Middle Kingdom had with its neighbours in relation to trade, politics, and cultural exchange.

A legendary repository for scholars of Southeast Asia and researchers interested in the Chinese World Order, Southeast Asia in the Ming Shi-lu is a veritable treasure trove of information on a dynamic region during a period of transcendental change. Though it is starting to show its age, the database nevertheless remains an incredibly important and valuable open access resource that has stood the test of time. 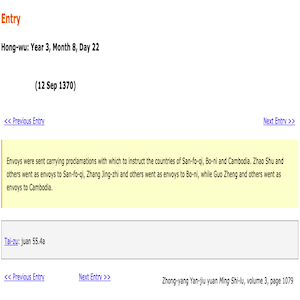 “A legendary repository for scholars of Southeast Asia and researchers interested in the Chinese World Order, Southeast Asia in the Ming Shi-lu is a veritable treasure trove of information on a dynamic region during a period of transcendental change.”