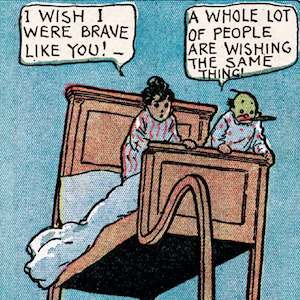 A young, tousled-haired boy about the age of seven is slumbering away in his bed, ensconced in a non-descript, middle class bedroom (fig. 1). He is jarred awake by the revelation that his bed is levitating, and slowly floating out his window and into space. So begins an episode of Winsor McCay's epic comic strip adventure, Little Nemo in Slumberland, which appeared in newspapers across the country between 1905 and 1914. Featured on the cover of the New York Herald's Sunday comic supplement (and syndicated nationwide), the comic presented the bedtime adventures of a small boy called Nemo. In the serial's debut, and in the weeks to follow, Nemo repeatedly attempted to reach the enchanted kingdom of Slumberland, only to have the journey preempted when he awakened and found himself safely at home in his bed. It was an ideal subject for a weekly comic in that the curtailed narrative induced readers to purchase the next installment. Such literature also taught its young readers an appreciation for the pleasures of both fantasy and delayed gratification. The primary sources referenced in this module can be viewed in the Primary Sources folder below. Click on the images or text for more information about the source.

This short teaching module includes an informational essay referencing the one primary source and a short description of how to teach the topic.