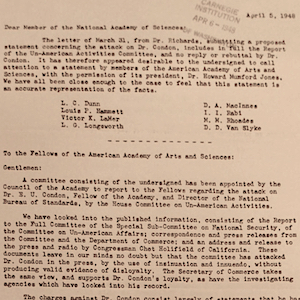 For decades, the relationship between science and the U.S. government during the early Cold War years was understood largely as a story of a militaristic state persecuting and co-opting scientists and scientific institutions to serve national security interests. And there is much truth to that framing: scientists fell victim to political witch-hunts over espionage, disloyalty, and even sexual orientation during these years. More recently, however, historians have reassessed the ways in which science and the state shaped each other during this period. As this module will explore, scientists themselves had considerable say in the development of the national security language of the era—they often played up their importance to national security, for example, in order to secure access and finances from the government. At the same time, they attempted to minimize government oversight in their work, which they cast as an age-old tradition that should be kept as free and open as possible. Through three documents, we will explore nuanced ways to understand the heightened security rhetoric of the 1940s and 50s, as well as the political aspects of commonly-held ideas about scientists and the nature of their work.