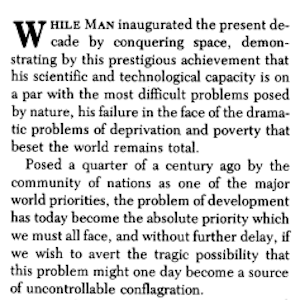 Since the early Cold War, neutral and nonaligned countries sought to overcome the division imposed by bipolar order. One of the most notable efforts to transcend the power dynamic of superpower relations was the Nonaligned Movement, formed in the early 1960s. The movement was at the apex of its influence during détente in the 1970s, tapping into the existing sense of anxiety among small- and medium-sized states over spheres of influence, neocolonialism, and economic inequality. In this decade, the movement came forward with several initiatives that aimed to resolve global political and economic problems. However, internal differences and conflicts among its members and the dissolution of détente rendered its efforts futile.