Short Teaching Module: Music and Decolonization in the Black Atlantic 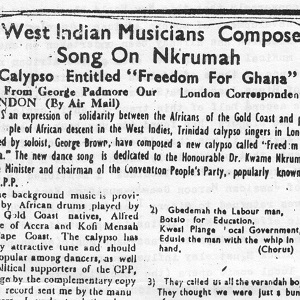 The decades after World War II witnessed rapid decolonization of European empires and a dramatic increase in independence movements for colonized peoples. Historians focus on individual colonies and their transitions to independent countries in order to understand how and why decolonization happened when it did, but they also find it informative to explore the cultural connections made across different parts of empires in order to understand that anti-colonial movements operated at both local and global levels (and in the spaces in between). This module explores transnational histories of music, musicians, and their audiences in order to reveal some of the intricate networks colonized peoples from West Africa and the Caribbean created in their efforts to overthrow British colonial rule.