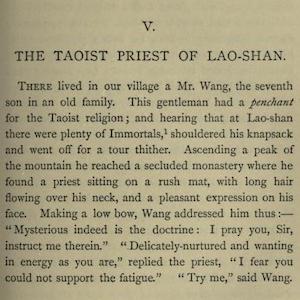 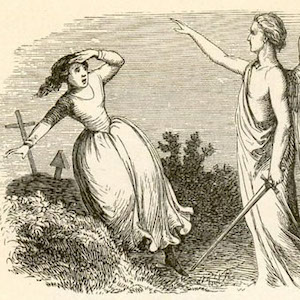 For this particular lesson we examined two classic tales that while similar in many respects, highlight regional cultural differences especially in regard to childhood ideals. In Hans Christian Andersen's "The Red Shoes" (1845) the protagonist gives into temptation but is able to redeem herself in the end. Though temptation is at the center of P'u Sung-ling's "The Taoist Priest of Lao-Shan" (1766), the end result is humiliation rather than redemption. The primary sources referenced in this module can be viewed in the Primary Sources folder below. Click on the images or text for more information about the source.

Folktales have been used for generations to teach moral tales to children. They have shifted over time depending upon the generation and location of the tale but remain part of the childhood experience for many young people. "The Red Shoes" published by Hans Christian Andersen in 1845 is a quintessential European folktale. It tells a moral tale based upon the idea of temptation and eventual redemption. The story is based upon the protagonist's desire for a pair of shoes and the consequences of her temptation. Andersen's use of Christian morality in his tale offers insight into European culture during the 19th century. Christianity was a powerful cultural influence and that is evident in the story. The church is a focal point throughout the moral tale and the themes of redemption and temptation directly connect to the Christian values that are taught to children.

The illustration is a woodcut from the 1849 German and Danish editions of a collection of Hans Christian Andersen stories. The illustrator is Thomas Vilhelm Pedersen (1820-1859), a Danish naval lieutenant whose illustrations were favored by Andersen himself, and have been closely associated with the tales since. Pedersen captures the story's mood with the sparse, dramatic background of the churchyard with gravestones, scraggly vegetation, and undulating horizon. The two figures present a stark contrast: the large, unyielding figure of the male angel with its arm outstretched to decree Karen's fate, and the helpless motion of Karen's figure, her windswept hair and dress, her feet in mid-air, and the frightened expression of her face and arms as if trying to flee.

Why I Taught the Source
It is likely that the last time many American high school students were exposed to folktales was in their childhood when at bedtime they heard stories such as "The Ugly Duckling" and "The Princess and the Pea." In my AP World History class, I reintroduce students to folktales along with a method for comparing and contrasting the European and Asian cultures that produced them. Focusing on folktales from 1750 to 1850 provides an opportunity to shed light on the dynamic relationship between culture, childhood, and children.

For this particular lesson we examined two classic tales that while similar in many respects, highlight regional cultural differences especially in regard to childhood ideals. In Hans Christian Andersen's "The Red Shoes" (1845) the protagonist gives into temptation but is able to redeem herself in the end. Though temptation is at the center of P'u Sung-ling's "The Taoist Priest of Lao-Shan" (1766), the end result is humiliation rather than redemption.

How I Introduce the Source
The two-day lesson began with an examination of the cultural contexts relevant to each historical source: Imperial China and industrializing Europe during the 18th and 19th centuries. We defined "culture" and discussed its components and meanings. Rather than seeing culture as a catchall term for societal institutions such as religion and government, I encouraged my students to consider the ways in which attitudes, prejudices, and folklore also influenced everyday life. Defining culture in this way helped students to think about folktales as a method for influencing children's ideas and behaviors.

Building upon our prior discussions about methods of analyses in previous classes, I suggested that the students read these primary sources comparatively in order to analyze how the two tales were similar and how they differed.

Reading the Source
For homework, students read the two stories and took notes on the themes, ideas, and topics. I asked each student to answer two questions on their personal blog:

Throughout the year students blog on Ning Ning, a social network that serves as a central location for student communication, reflection, and collaboration. Each student has their own blog where they routinely write entries, answer questions, and post relevant videos or world music that they find. The use of the Ning provides a central location and an interactive method of communication outside of class.

In addition to posting their own blog entry, students were asked to write a substantive comment on at least one of their classmates' blog entries in an attempt to offer a new approach or raise an issue for discussion. I graded the students on the value that they added to the discussion in both their own blog entry and in their peer commentary. As students posted their entries and comments, I noted the dominant themes and salient ideas in preparation for our next class meeting.

The next day, students met in groups of three for five minutes to discuss what they had discovered the night before. After the small group discussion, the class as a whole discussed the sources and what folktales might tell us about cultural values.

Reflections
In their discussion, students noted the emphasis on a belief system in both folktales. They mentioned that while "The Red Shoes" was a violent tale, the protagonist was able to repent and redeem herself because she was a Christian. While "The Taoist Priest of Lao-Shan" was not as violent, the protagonist's temptation left him in a state of humiliation.

Students determined that the two stories shared temptation as a common theme but noted the different results of that temptation. They concluded that both Mr. Wang from "The Taoist Priest of Lao-Shan" and Karen from "The Red Shoes" are both tempted by vanity. Whether it is for a pair of shoes or the secret of immortality, the theme is similar. While both characters are tempted, the students believed that their fates are vastly different. They recognized that redemption is found only in "The Red Shoes," where as Mr. Wang from "The Taoist Priest of Lao-Shan" is shamed for his temptation. The class decided that the regional differences in the folktales are based upon that fact. In the end, my students concluded that the emphasis on redemption in Christianity and the lack of redemption in Taoism helped define European and Chinese cultures during the 18th and 19th centuries and, in turn, influenced the development of the region’s children.

Analyzing these two tales provided students with an opportunity to understand one way in which cultural values were transmitted, that is, via childhood. This lesson was also designed to improve students' critical thinking and writing skills by demonstrating that while some childhood lessons are similar across cultures, there are also many important cross-cultural differences.

In examining the two regional folktales, my students discussed how these stories may have been used to teach moral lessons. By critically reading and analyzing similarities and differences, students' ability to compare and contrast showed improvement. This lesson on children, morals, and culture works well because it connects students to the stories that they read in their youth while helping them develop a better understanding of how literature can enhance our understanding of the meaning of childhood in culture and history.