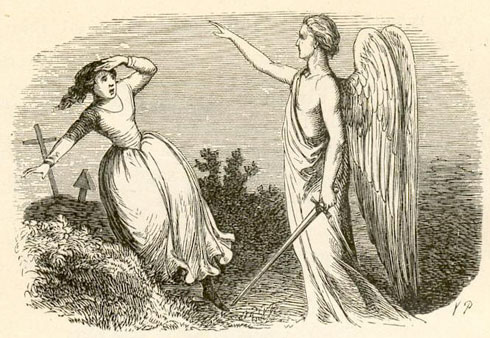 Folktales have been used for generations to teach moral tales to children. They have shifted over time depending upon the generation and location of the tale but remain part of the childhood experience for many young people. "The Red Shoes" published by Hans Christian Andersen in 1845 is a quintessential European folktale. It tells a moral tale based upon the idea of temptation and eventual redemption. The story is based upon the protagonist's desire for a pair of shoes and the consequences of her temptation. Andersen's use of Christian morality in his tale offers insight into European culture during the 19th century. Christianity was a powerful cultural influence and that is evident in the story. The church is a focal point throughout the moral tale and the themes of redemption and temptation directly connect to the Christian values that are taught to children.

The illustration is a woodcut from the 1849 German and Danish editions of a collection of Hans Christian Andersen stories. The illustrator is Thomas Vilhelm Pedersen (1820-1859), a Danish naval lieutenant whose illustrations were favored by Andersen himself, and have been closely associated with the tales since. Pedersen captures the story's mood with the sparse, dramatic background of the churchyard with gravestones, scraggly vegetation, and undulating horizon. The two figures present a stark contrast: the large, unyielding figure of the male angel with its arm outstretched to decree Karen's fate, and the helpless motion of Karen's figure, her windswept hair and dress, her feet in mid-air, and the frightened expression of her face and arms as if trying to flee.

This source is a part of the Children, Culture, and Folktales teaching module.