The Indochina War, 1945-1956 is an excellent interdisciplinary resource that provides specialists, teachers, students, and the public with a diverse range of tools and information on a conflict that has been largely overshadowed or absorbed as a small component of the American War in Vietnam. Beyond providing an excellent suite of resources on the First Indochina War (as it is more popularly known), it also serves an important function of recovering a difficult moment in the histories of Vietnam, Cambodia, Laos, and France that does not receive as much attention as it should.

As the home page of the website itself states, the project is very much still in progress and the entries are continuously being updated and visitors are encouraged to submit any corrections or suggestions to the project team in order to improve it. One of the project’s key resources is the ‘Historical Dictionary’, which is in effect a digitised version of historian Christopher E. Goscha’s Historical Dictionary of the Indochina War: An International and Interdisciplinary Perspective that is searchable via a simple keyword search engine. The online version of the dictionary contains over 1,500 entries that cover the gamut of the Indochina War, going beyond the immediate military and political terms that tend to be the foci of such texts to also cover the relevant social and cultural contexts as well. The ‘Chronology’ page represents the pièce de résistance, serving as a fantastic source for researchers, students, and interested members of the public to consult. There are two options, a simplified chronology that provides a broad overview of major events in the conflict and a more detailed chronology that provides a more in-depth and comprehensive chronicle of the war. In addition to containing vastly more detailed record of the First Indochina War, the advanced chronology also allows readers to search through the events as well as sorting them by date, where it took place, event, key actors (both individual and collective), theme, and keywords. Serving as the backbone of the entire endeavour, the ‘Bibliography’ is an ever-growing collection of Vietnamese and non-Vietnamese language publications regarding the Indochina War that can also be sorted by author, date, title, journal name, volume, page length, publisher, place of publication, keywords, source type, and language. It serves as a complement to eminent historian Edwin Möise’s bibliography, which catalogues all the Indochina Wars but focusses primarily on the American War in Vietnam.

In addition to the textual resources outlined above, the website also contains a gallery of photographs drawn from Wilfred Burchett, Franz Faber, Philippe Devilliers, Serge Laroche, and Paul Villatoux. Between the five collections, there are hundreds of photographs primarily consisting of intimate portraits of both ordinary Vietnamese peasants, soldiers, and children, as well as leading figures like Ho Chi Minh; candid shots of British. French, Japanese, and Vietnamese military units in and out of action; landscapes of rural and urban Vietnam, and social movements as they unfolded.

The platform has been designed with the classroom in mind, serving as a repository of information for courses that focus on the French attempt to reconquer Indochina after the Second World War. In particular, the historical dictionary and chronology together provide a comprehensive set of readings for students to consult in order to familiarise themselves with both the general and specifics involved in the First Indochina War. Educators can consult the bibliography to develop reading lists and to find assigned texts for long-form written assessments or they could even point students to the bibliography to consult on their own as part of the research process. In addition, the photographs provided—which are exceedingly rare visual records of the conflict—can also be used either as a teaching aid to supplement class discussions or as historical objects of analysis in and of themselves.

For anyone interested in learning the history of the First Indochina War, the Indochina War, 1945-1956 is the definitive online resource to consult. Built on the knowledge and expertise of some of the leading historians of Indochina, the platform is a remarkable and powerful reminder of an important moment in global history. 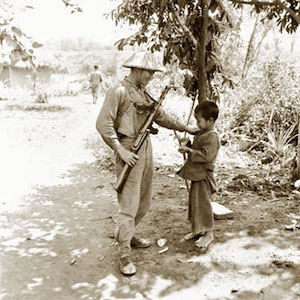 “Beyond providing an excellent suite of resources on the First Indochina War (as it is more popularly known), it also serves an important function of recovering a difficult moment in the histories of Vietnam, Cambodia, Laos, and France that does not receive as much attention as it should. ”