Illustration from The Maqamat of al-Hariri 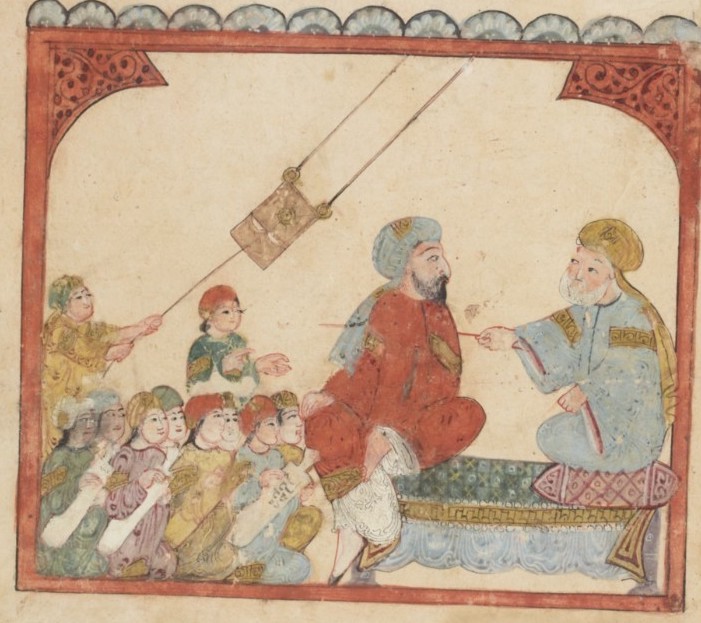 During the Abassid period and onward, children four or older in villages and urban centers began attending schools (maktabs) attached to mosques to obtain a basic education in religious matters. Students in a maktab sat in a semicircle on the floor around the teacher writing their lessons on a tablet and then repeating it back for correction. In this illustration, one boy recites for the teacher while another boy takes his turn pulling the ceiling fan. Attendance at maktabs was voluntary; typically, wealthier families paid for their child to attend and poorer students exchanged the running of a teacher's errands for tuition. Successful students could go on to study with individual scholars at madrasas, which were supported by an endowment.

Generally, girls did not attend schools and when they were educated, if at all, it was in separate facilities or by private tutors. Some women made notable contributions to Islamic scholarship in the medieval period, routinely giving lectures, traveling for knowledge, transmitting and critiquing hadith, and issuing legal decisions. They did so within the cultural conventions of modesty and avoiding, to the extent possible, mixing with men.

"Illustration from The Maqamat of al-Hariri," in World History Commons, https://worldhistorycommons.org/illustration-maqamat-al-hariri [accessed October 3, 2022]