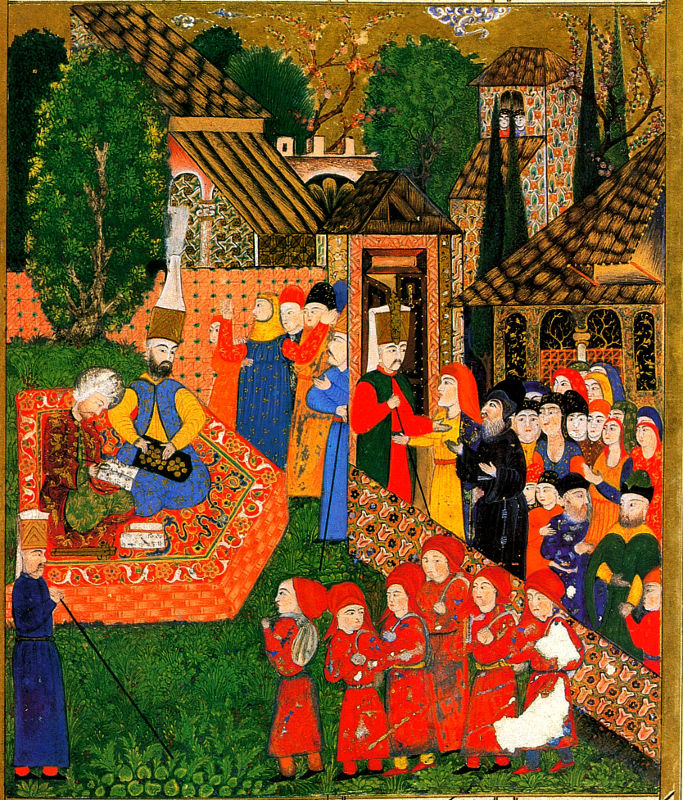 This Ottoman miniature painting from 1558 shows a group of boys dressed in red, being registered for the devshirme (usually translated as “child levy” or “blood tax”). The devshirme was a system of forced labor, probably begun in the late 14th century, in which Christian boys, mostly from the Balkans, were taken from their homes to serve the Ottoman government. The artist captures the first stage of this process, with the boys’ families kept behind a wall by an Ottoman official. The aim of the sultans was to create a group of officials and soldiers who would be loyal to him rather than to their own families, as many Turkish nobles were. The boys were taken to Istanbul, forcibly converted to Islam, and placed with Muslim families or in schools. Those sent to school learned Arabic, Persian, Turkish, math, calligraphy, Islam, horsemanship, and weaponry, passing through a series of examinations to determine their intelligence and capabilities. They were essentially slaves to the state, but some acquired power and prestige. Many became soldiers and army officers, including the elite Janissary corps, the sultan’s personal troops. Others became government ministers, provincial governors, and even grand viziers, the highest office except for the sultan. Because of these opportunities, there is evidence that some families (including Muslim families) volunteered their sons, though the practice was also a source of trauma and resentment against Ottoman rule. The devshirme system slowly declined in the 17th century.