These thousands of photographic images, maps, and texts focus on Shanghai during the pre-1949 period, bringing a wealth of visual material previously scattered among various institutions to students, teachers, and scholars. Project Directors Christian Henriot (Lyon University) and Wen-hsin Yeh (UC Berkeley), internationally recognized authorities on the history of Shanghai and Chinese urbanism, envision a dynamic collection that will continue to grow in size and geographic scope.

The site consists of an introductory page, and sections presenting images, maps, live maps, and texts. A quick perusal of the images (and the thematic albums they are divided into) is perhaps the simplest way to get a sense of the contents and the particular biases of this photographic database. The albums are loosely organized according to broad rubrics: “Cityscape," “Official Institutions,” “Culture,” “Religion," and “Education,” “Economy," “Civic Organization,” “People & Everyday Life,” and “War." As these albums make clear, the database is heavily oriented towards themes of urban planning and architecture. In addition, the collection is strongest in presenting images of traffic, gardens, factories, workers, advertisements, shops, entertainment, school campuses, soldiers, clothing and uniforms, and modes of transport, such as bicycles, rickshaws, railways, steamboats, automobiles.

The “Education” album is particularly interesting because it contains images of campuses (mostly located in the foreign concessions), portraits of (mostly foreign) instructors, and sporting events. Here is a clear predilection for photographers to document the foreign impact and presence within this semi-colonial city.

All images are keyword searchable, and results are ordered according to a field of one’s choice (title-subject; keyword-general; keyword-street name; date; estimated time period; location; action; repository). The expert search allows for selection of two fields in Boolean “and/or” combinations. Sample searches reveal that some themes are more represented than others. For example, “cinema” resulted in only 39 images while “police” netted 586. “Leisure” produced 378 images, while “prostitute” (for which Shanghai was infamous) resulted in 4 images.

Every database has its own idiosyncratic system of keywords; however, one can still detect a certain amount of bias in the photographs themselves. For example, one of the most unique aspects of this collection is the visual documentation of the Japanese assault on the city in 1932. The onslaught included one of the earliest aerial bombardment campaigns of the Pacific war and it is well documented here. Still, much of the photographic evidence seems to concentrate on damage done to the foreign concessions rather than to the “native” or Chinese city. An expert search combining “bombing” and “concession” yielded 25 images, while one combining “bombing” and “native city” or “Chinese city” (all standard within the database’s lexicon of keywords) yielded nothing.

A productive classroom exercise might be to juxtapose these photographs of Shanghai with those images found at the site The Hedda Morrison Photographs of China, 1933-1946. How do these 1,200 pre-Revolutionary photographs of the treaty port Shanghai differ from Morrison’s? To what can we attribute these differences? Geography and place? Intentions and motivations of the photographer(s)? 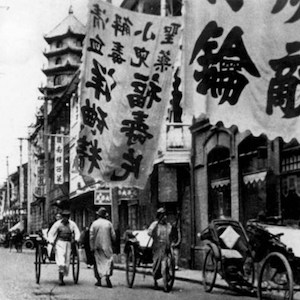 “These thousands of photographic images, maps, and texts focus on Shanghai during the pre-1949 period, bringing a wealth of visual material previously scattered among various institutions to students, teachers, and scholars.”