The Vatican Library online? The very idea makes a teacher’s heart beat faster, but this site, alas, is not a mirror of the Vatican’s extensive holdings. The site was based on a Library of Congress exhibit and reflects its origins. It is divided into nine sections, including archaeology, mathematics, music, and medicine. Each section contains a selection of books, manuscripts, maps, and other material from the Vatican Library, designed to show how Rome contributed to the renaissance of classical ideals and learning. The more than 200 items also include alternative sources the Vatican sent to the Library of Congress for possible inclusion in the exhibit.

The site itself is visually low key: one arrives at a page with a small black-and-white image for header and footer. It’s clear that the designer’s attention was focused upon the objects themselves, and this focus is understandable. The images, digitized from 35 mm slides, are generally clear and legible, and, in every case, beautiful. Included are illuminated manuscripts and drawings – but also a blooming double page from the Materia Medica and Pirro Ligorio’s extraordinary map of ancient Rome as a living city.

Navigation is straightforward. I liked being able to scan across images on my browser and, after some time exploring, began to appreciate the gentle humor that informed the system of links, with its references to “secret rooms” and tour buses. (In the end, I boarded the tour bus—well, clicked on the hyperlink—and arrived at a virtual EXPO containing not only other exhibitions, including one on paleontology, but a week’s worth of menus and recipes from the Cordon Bleu. There is even an online bookstore associated with the Vatican site and other EXPO exhibits.)

How might a history class make use of the images on exhibit? In most cases, reading the primary documents will not be a useful exercise. While the images are clear, no more than a page or two is visible, with neither transliteration nor translation provided. The student may be frustrated, as I was, by the image of Henry VIII’s Defense of the Seven Sacraments against Martin Luther. The exhibit notes point out that while Henry may not have written the Defense himself, “[h]e did add, in his own hand, the couplet seen here, in which he presents the book to Pope Leo X.” This couplet, however, is not fully legible, and no transcription is provided. Since exhibit notes tell us that “the manuscript was shown to famous visitors to the Vatican Library as early as the 16th century,” it would be interesting to know exactly what the redoubtable Henry wrote.

A nearby exhibit offers diligent students an opportunity to read what Henry wrote to Anne Boleyn, but it also offers some serious challenges. The letter has Henry telling Anne that although “there can be no more done,” it will “be hereafter to bothe our c_[m]forte.” It may be a measure of the academic difficulties that exhibit notes originially identified this letter as being in French. Apart from the foot of the image, however, which contains a separate, short note, the letter to Anne is unquestionably in the King’s English.

While reading the primary documents in this exhibit may prove difficult, the opportunities for visual analysis here are plentiful. The period in question is one in which papal authority is seriously challenged, so students might examine some of the images of popes shown in the collection. Nicholas V is portrayed in Giovanni Tortelli’s De Orthographia, and in the Latin translation of Chrysostom’s commentary on Matthew’s gospel. They could also examine the image of Sixtus IV in the Lives of Jesus and the Popes and Eugene IV in the Dialogues against Lactantius, always keeping in mind that these images are from the Pope’s own library.

But the best use of this site might be to accept it as an exhibit and encourage students to wander through it themselves, stopping where they choose, so that they discover the beauty and variety of the collection. 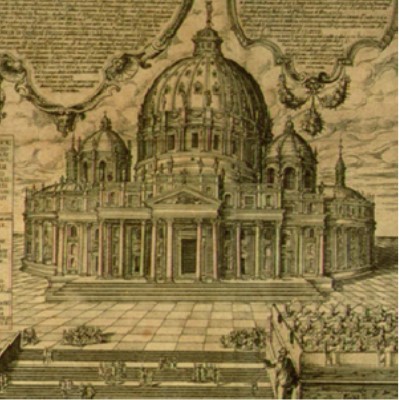 “But the best use of this site might be to accept it as an exhibit and encourage students to wander through it themselves, stopping where they choose, so that they discover the beauty and variety of the collection.”