Library of Congress and National Library of Brazil 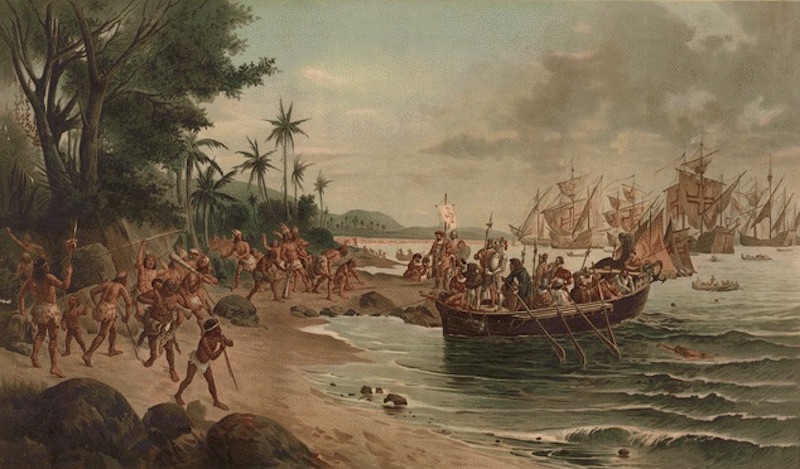 “The goals of the site are to illuminate Brazilian history, to explore the historical and cultural interactions between Brazil and the United States, and to draw attention to the similarities and differences between these two societies.”

This bilingual website presents a digital archive of books, maps, photographs, and manuscripts. The goals of the site are to illuminate Brazilian history, to explore the historical and cultural interactions between Brazil and the United States, and to draw attention to the similarities and differences between these two societies.

In its current state, the website can be navigated in several different ways. One option is to explore the “Historical Foundations” section. There, users will find a basic timeline of major events in Brazilian history from the days of Portuguese exploration in the 15th century to World War I, a seemingly arbitrary endpoint that is not explained on the site. In addition to the timeline, “Historical Foundations” divides Brazilian history into five chronological units: “Navigation and Discovery,” the “Colonial Period,” the “Movement for Independence,” the “Imperial Period,” and the “Republic.” Clicking on one of these units yields a brief essay describing the period as well as a series of one to four thumbnails that link to related primary documents. Within each of the five units, there are several subheadings, each of which link to another interpretive essay and another series of primary documents.

Alternatively, users can avoid this section and explore the primary sources directly. Clicking on “Collections” yields a list of the nine available source collections. Users can then browse the images and documents contained in each. Users can also search the entire collection by keyword. Even in its incomplete state, the website’s archive of primary sources is substantial. There are several dozen historical maps of Brazil, several complete books and manuscripts, a substantial archive of private correspondence, as well as the “Lady Maria Calcott Collection,” which includes 39 watercolors depicting life in Brazil in the early 19th century.

Unfortunately, the website is a bit difficult to use effectively. In places, the interface is awkward. In “Historical Foundations,” primary sources are listed to the right of the text, but the explanatory footnotes that accompany them appear in the center of the screen where they can be easily overlooked. A more serious problem is that many of the primary sources are hidden from all but the most intrepid searchers.

For example, there is a large collection of Thomas Jefferson’s letters relating to Brazil, yet only a few of these appear in “Historical Foundations.” And searching the collections for “Jefferson” produces no results. As far as I can tell, the Jefferson letters only appear under “Selected items from the Manuscript Division” within the “Collections” section.

A further difficulty is that while all of the historical essays are available in both Portuguese and English, the same cannot be said for the sources. Many documents, including, for example, Princess Isabel‘s decree abolishing slavery in Brazil, are presented without English translation.

Perhaps most problematic, the historical essays provided in order to contextualize the documents are at best superficial and at worst seriously misleading. Students who lack any background in Brazilian history will learn here that the growth of the middle class was a major cause of the independence movement in the late 18th century. Or that Brazilian Emperor Dom Pedro II was inspired by Abraham Lincoln to emancipate the slaves, but met with the opposition of “farmers,” both quite dubious propositions. Likewise, users are told that Brazil’s First Republic was modeled on the American political system but are given no introduction to the system of clientelism and patronage, known as coronelismo, that supported oligarchic rule in this period.

Given the weakness of these historical narratives, teachers would do well to ignore them and to steer students directly to certain documents and images. In conjunction with a reliable historical introduction, these sources could provide valuable opportunities for historical interpretation.

Students might be asked to read excerpts from Maria Graham’s Journal of a Voyage to Brazil (1824) and from Theodore Roosevelt’s Through the Brazilian Wilderness (1914), both of which are available in their entirety on the website. They could then compare the authors’ accounts in order to explore European and American attitudes and preconceptions about Brazil. Similarly, students could examine these preconceptions via the watercolors of Lady Calcott and the artwork of Jean Baptiste Debret and Johann Mortz Rugendas, among others.