"To the Spirits of Camila O'Gorman" 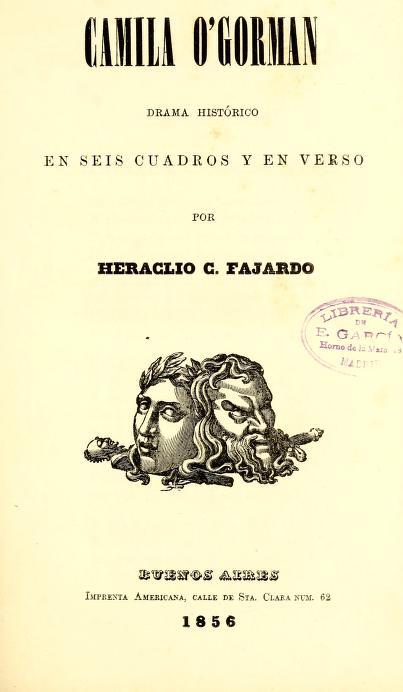 The story of Camila O'Gorman (1828-1848), the daughter of a prominent merchant in the Buenos Aires community, is one of the most famous cases of a young person challenging both parental and state authority. In 1847, at the height of Rosas's power, 19-year-old Camila and Ladislao Gutiérrez, a young Catholic priest from Tucumán, fell in love. On December 12, 1847, they eloped and fled to Corrientes, a neighboring province to Buenos Aires. Eight months later, they were captured, imprisoned at Santos Lugares, and put to death by a firing squad. History has been more kind to Camila than to Gutiérrez. The young priest was condemned for violating the Church's code of conduct and the social order. Many eyewitnesses, including Camila's father, Adolfo O'Gorman (see document 9), blamed the beleaguered priest for manipulating an impressionable young woman.

Camila O'Gorman's execution in August 1848 had repercussions long after her death. Her death touched off a series of international protests against the caudillo dictator. Before the execution, exiled Unitarians in Uruguay taunted Rosas in their newspapers for not doing enough to put an end to Camila's unlawful and illicit behavior. After Camila's death, however, they used Camila's story to show that Rosas was cruel and bloodthirsty. After Rosas was overthrown in 1852, strong feelings about Camila's death sentence remained. In 1856, the Uruguayan author, Heraclio Fajardo (1833-1868), wrote a six act play simply titled "Camila O'Gorman" in her honor. In the play, he also dedicated a poem to her, "To the Spirits of Camila O'Gorman," as an impassioned plea for future generations of Argentines to not repeat the mistakes of the Rosas era.

""To the Spirits of Camila O'Gorman"," in World History Commons, https://worldhistorycommons.org/spirits-camila-ogorman [accessed January 26, 2023]