Briscoe Center for the American History, University of Texas at Austin 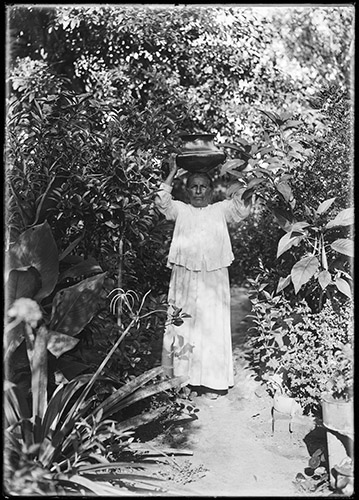 “These images represent a valuable visual record of life in the south Texas borderlands during the 1910s and 1920s, as well as an important window onto a relatively understudied phase of the Mexican Revolution.”

This collection includes more than 8,000 images produced by Runyon, a commercial photographer based in Brownsville, Texas. These images represent a valuable visual record of life in the south Texas borderlands during the 1910s and 1920s, as well as an important window onto a relatively understudied phase of the Mexican Revolution.

The website provides only minimal historical context for the images it contains. A 1000-word biographical essay on Runyon, a general description of the collection, and three maps of the Lower Rio Grande region are the only aids to orient the user.

Individual images are accompanied only by the most basic descriptions, such as “Barricades,” “Soldiers,” or “Generals Pablo Gonzalez and Jesus Carranza visiting hospital.” Images are often undated. There are two search mechanisms: one can either search directly for specific subjects, such as “automobiles” or “Missions,” or browse the list of subject headings. Using these techniques, one can isolate 323 images of the Mexican Revolution, 11 photographs of railroad accidents in Mexico, 14 pictures of factories in Texas, or 27 photographs of public executions.

Less useful are subject headings such as “soldiers,” which applies to 1,341 photographs. Clicking on a thumbnail takes the user to a very large digital reproduction of the photograph. The images are terrific–-clear, sharp, and often quite beautiful. For example, the impressive clarity of the photograph, “Maria Gonzalez and soldaderas,” makes it possible to analyze the flag, clothing, weaponry, and facial expressions of three female soldiers who served the Constitutionalist army during the Mexican Revolution.

The combination of a fascinating photographic archive and a minimalist approach to historical context makes this website tantalizing but difficult to use. At the very least, teachers need to guide students by providing concrete topics to search or, even better, specific photographs to analyze.

The website’s only attempt to contextualize a group of photographs is a section entitled The Mexican Revolution: Conflict in Matamoros, that documents the fall of that border town to Revolutionary forces in June 1913. Here, nine of Runyon’s photographs are displayed alongside a brief account, drawn from the book War Scare on the Rio Grande: Robert Runyon’s Photographs of the Border Conflict, 1913-19161 by Frank Samponaro and Paul Vanderwood. Although the subject matter is important, the narrative presented here is quite superficial. Teachers might ask students to consult the Samponaro and Vanderwood book directly and then search for evidence among the 323 Mexican Revolution photographs on the site. Alternatively, students studying the Mexican Revolution might be asked to explore the photographs for evidence on a specific issue, such as the role of women in the Revolution, the composition of the Constitutionalist army, or the nature of revolutionary justice on the border.