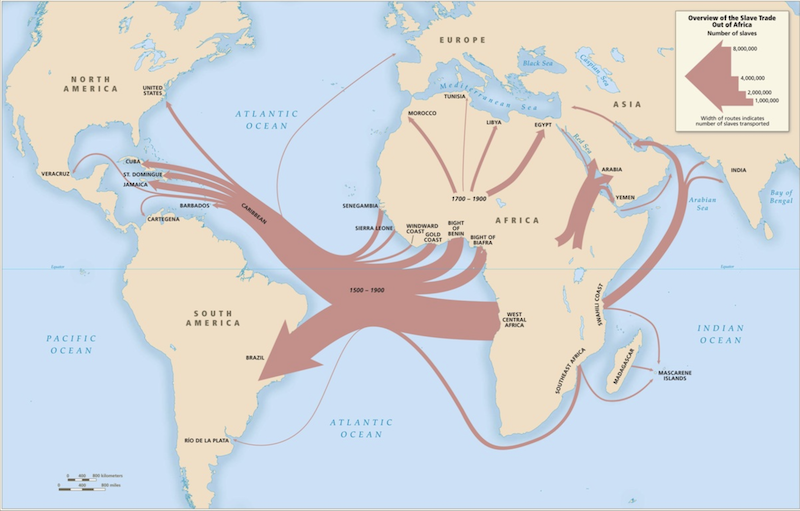 “Slave Voyages is an essential project for those seeking to learn more about enslavement and imperial powers in the Atlantic World, the transatlantic slave trade and Middle Passage, and the African diaspora.”

Slave Voyages documents the history of the transatlantic slave trade and forced migration of millions of people from Africa to the Americas between 1514 and 1866. The site is geared toward scholars, educators, and students and is made up of three main databases. The Transatlantic Slave Trade Database details 36,000 slaving voyages from archival sources around the Atlantic, providing information on vessels, routes, enslavers, and the enslaved. The Intra-American Slave Trade Database documents slave trading networks and demographic patterns in the New World from over 10,000 slave voyages in the Americas. The African Names Database includes personal information, such as age and gender, for thousands of people who were liberated from illegal slave ships or from African trading sites in the 19th century. Slave Voyages also includes introductory maps and essays, timelines of the transatlantic slave trade, a 3D model of a slave ship, an image gallery linked to specific voyages, and lesson plans for the secondary school classroom.

A potential hurdle users might encounter when using this site as a teaching tool is interacting with the databases to create graphs and maps. It takes some time to understand what information is included in the site and how the many variables can be changed to show certain data. Fortunately, there are several contextual essays on history and methodology that accompany each database, as well as step-by-step instructions in some of the lesson plans on how to create graphs and maps from the database for teachers and students.

Slave Voyages is an essential project for those seeking to learn more about enslavement and imperial powers in the Atlantic World, the transatlantic slave trade and Middle Passage, and the African diaspora.