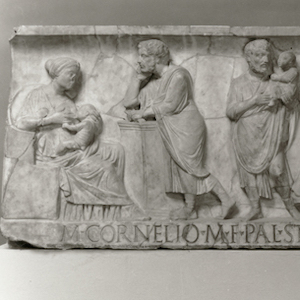 I use images of two Roman marble sarcophagi for topics on children and childhood in undergraduate courses on ancient society, family, gender, representations, and historiography. The sarcophagi can be used to study one period of antiquity or to examine changing notions of childhood over time. My aim in using the sarcophagi is to increase students' awareness of the rich variety of accessible material sources about Roman society—especially archaeological resources such as art, architecture, inscriptions, and topography—that can supplement traditional literary sources. A careful analysis of images from an unfamiliar society can help students already exposed to visual material in their daily lives become more discriminating in their interpretations. The primary sources referenced in this module can be viewed in the Primary Sources folder below. Click on the images or text for more information about the source.