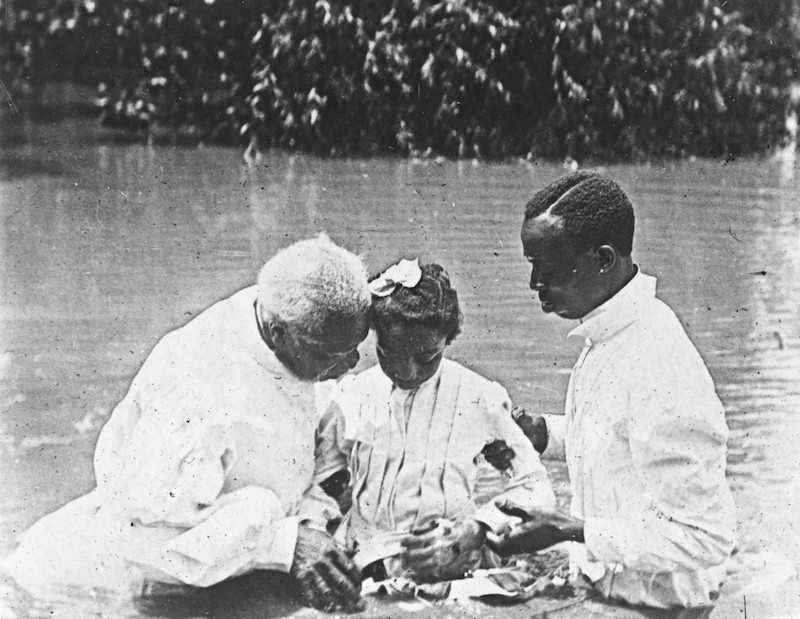 “These arresting images document telling elements of African Americans' daily lives in Georgia during this period.”

The 86 photographs in the Robert E. Williams Photographic Collection database were taken by Robert Williams, an African American who operated a photography studio, R. Williams and Son, in Augusta, Georgia from 1888 to roughly 1908. The photographs themselves date from 1872-1898, and thus span the brief period of post-civil war society when African Americans temporarily enjoyed augmented civic rights and social mobility before plunging into exacerbated racial segregation in the 1890s. The images document various aspects of the domestic, working, and religious lives of African Americans in Georgia. Children are featured both as central subjects and background observers in 34 photographs in the Collection. Williams captured them playing, toiling, eating, and getting baptized.

These arresting images document telling elements of African Americans' daily lives in Georgia during this period. Unfortunately, many of them are grainy or shadowy, making it difficult to decipher important detail in them, such as subject' facial expressions. The photographs are presented on the Collection’s site in thumbnail views in an unsearchable browse format, but since this the small database is small, scanning through them to find images dealing with children is feasible. Another alternative, however, is to search the collection from the Digital Library of Georgia web site. The Collection’s site are held in the University of Georgia’s Hargrett Rare Book and Manuscript Library. From there, a basic search of "Robert E.Williams children" restricted to the holdings from the Hargrett Library turns up a much larger pool of 3490 images. Searching the items in this way also provides users with slightly more bibliographic information about the pieces (for example, more detailed titles) than are available on the Collection's own web site page.

The site provides no contextual material on the photographer, the circumstances under which the photos were taken, the generation of their titles, or the contemporary experiences of his subjects. Consequently, most instructors will need to refer students to other reading materials. For the latter point, another site at the University of Georgia, "Georgia African American History and Culture" would serve as a good starting point for further research.
In photographic collections from this period (for example, the "Archived – Framing Canada” collection, family portraits are prominently featured. Unusually, however, in the Williams Collection, no photographs depicts what the collection has explicitly labeled as a family Instead, the images' titles refer to "groups" of people, or state simply “Woman with six children.”

Similarly, there are no photographs of children in school. Instructors might initiate students' examination of children's history as treated in this site by asking them to consider why family portraiture—or school photographs—are so atypically under-represented here. Is their absence in some way a reflection of assumptions made by the person who titled the images, a manifestation of the photographer's choices, or evidence of his subjects' realities? Why might children have been more often presented in these photographs in other settings—for instance, playing or working—than in the settings of the school and the family?

One feature that makes this collection unusual is that, atypically for this time period, the photographer as well as his subjects were African American. Instructors might ask students to reflect upon whether they think this fact visibly affected the way children are depicted in such images as “Two children” and “Two children eating watermelons.” These and other images from the site might fruitfully be studied alongside other contemporary primary sources documenting 19th-century African American history, including the Library of Congress's “African American Perspectives: Materials Selected from the Rare Book Collection,” and contemporaneous with Williams's photographs are several annual reports of the National Association for the Relief of Destitute Colored Women and Children. Also included are appendices containing several letters by children themselves. Students might compare these disparate representations of 19th-century African American children’s lives and analyze the reasons for Williams' distinctive portrayal of children’s experiences.