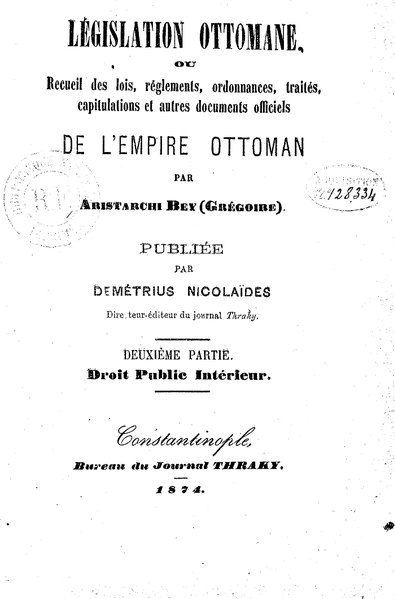 The Imperial Reform Edict of Ottoman Sultan Abdulmejid I, appearing originally in 1856 and subsequently in this 1874 publication, promised equality of access to education, government appointments, military service, and administration of justice to all, regardless of religion, language, or race. In the Edict the sultan promised to establish "Provincial Councils" and "Communal Councils” that were to represent each religious community in formulation of imperial policy. Councils were to be headed by elected officials from the community, and arbitrary fees assessed of congregants by church officials were abolished. The sultan also promised the right of foreigners to own property. The Edict was published in French, not Ottoman Turkish. It broadened the rights earlier promised Protestants in the Empire in a decree of 1850. As earlier, British diplomats pressured the sultan to make reforms on behalf of Protestants as well as Roman Catholics, which the British minister Lord Stratford de Redcliffe argued were a concession for Britain’s and France’s sacrifice on the Ottoman Empire’s behalf in the Crimean War 1853-1856, which resulted in the Ottoman entry to European family of nations. But Abdulmecid took these complaints seriously, especially since he continued to seek the support of the Western European powers. This Edict, confirming the Empire’s organization into semi-autonomous religious communities, or millets, proved destabilizing by helping to legitimize Armenian nationalism and encouraging foreign influence. This source is also part of a Long Teaching Module by Heidi Morrison, "Education in the Middle East, 1200-2010."