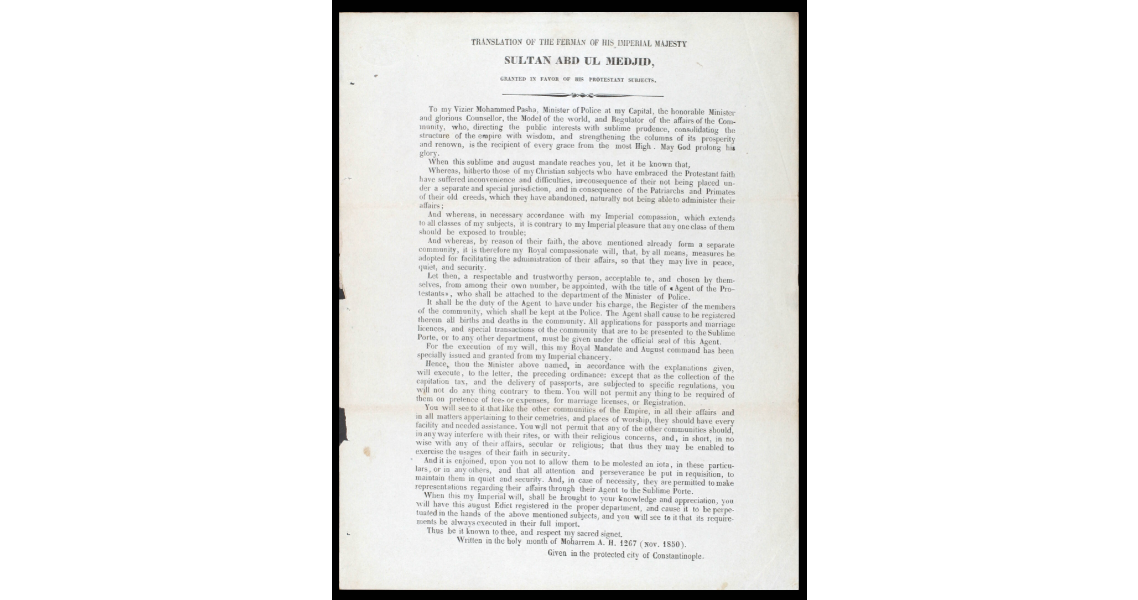 This imperial decree, or firman, was translated from Ottoman Turkish to English by the American Board of Commissioners for Foreign Missions. Ottoman Sultan Abulmecid I emphasized his compassion for all classes of his subjects, but here specifically prescribed that Protestant subjects in the Ottoman Empire should be recognized as a religious community, or millet, separate from the Muslim, Jewish, and Catholic and Orthodox Christian communities, and that they should enjoy the full and free exercise of their religion. In 1846 the first Protestant church in the Ottoman Empire, an Armenian Protestant church, was established at Istanbul. It recognized the difficulties Protestants had encountered because they lacked a special jurisdiction. It recognized that the Armenian patriarch was unable to superintend the Protestants’ affairs, and called for the Protestant community to elect a representative, who was responsible for registering individuals’ names with the police for tax purposes, issuance of passports, and recording of, births, deaths, and marriages. Protestant sources reported that two British diplomats, Sir Stratford Canning and Lord Henry R. C. Wellesley Cowley, had worked to negotiate this recognition. Lord Cowley in reply praised the missionaries’ zeal, prudence, and patience. At the time the number of Protestant churches in the Empire was steadily increasing, although some former Muslims continued to face threats as serious as execution for those converting to Christianity. This 1850 decree was followed by a broader edict of 1856.