Mencius and his Mother: A Lesson Drawn from Weaving 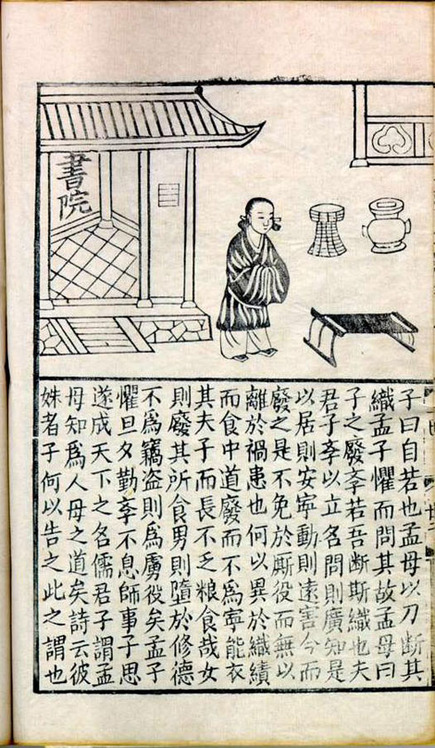 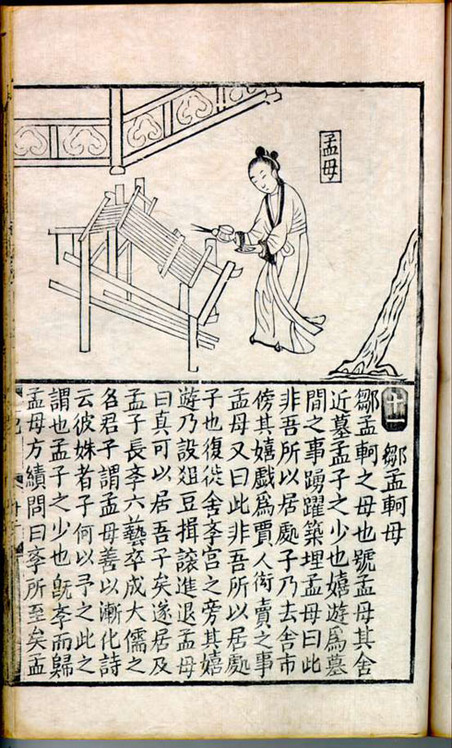 This illustration depicts a scene from the Traditions of Exemplary Women (Lienü zhuan) of Liu Xiang (ca. 77-6 BCE), one of China's first didactic texts on feminine morality. The text to this story is provided below the illustration. The story recounts the upbringing of Mencius (ca. 371-289 BCE), one of the greatest Confucian philosophers of early China. Mencius, or Mengzi, as he is known in China), is the only other early Chinese philosopher, who in addition to Confucius (Kongzi in Chinese), is known in the west by his Latinized name. These names were devised by the first westerners to study Chinese thought intensively, namely, the Jesuit priests who traveled to China in the 16th century and who translated Chinese texts into Latin.

This story brings up two important aspects of child-rearing in early China. First is the idea that because children are gradually imbued with the values and behaviors of those around them, a parent cannot be too careful about what a child sees and hears on a daily basis. Second is the notion that because moral development is a slow and gradual process, it is essential to train the malleable nature of the child in the ways of virtue and diligence before bad habits and behaviors become ingrained in the personality. The story also indicates that in preparation for useful lives as adults, boys were to occupy themselves with book-learning while girls were to master weaving.

Liu Xiang, "Mencius and his Mother: A Lesson Drawn from Weaving," c. 77-6 BCE, Children and Youth in History.

"Mencius and his Mother: A Lesson Drawn from Weaving," in World History Commons, https://worldhistorycommons.org/mencius-and-his-mother-lesson-drawn-weaving [accessed July 1, 2022]