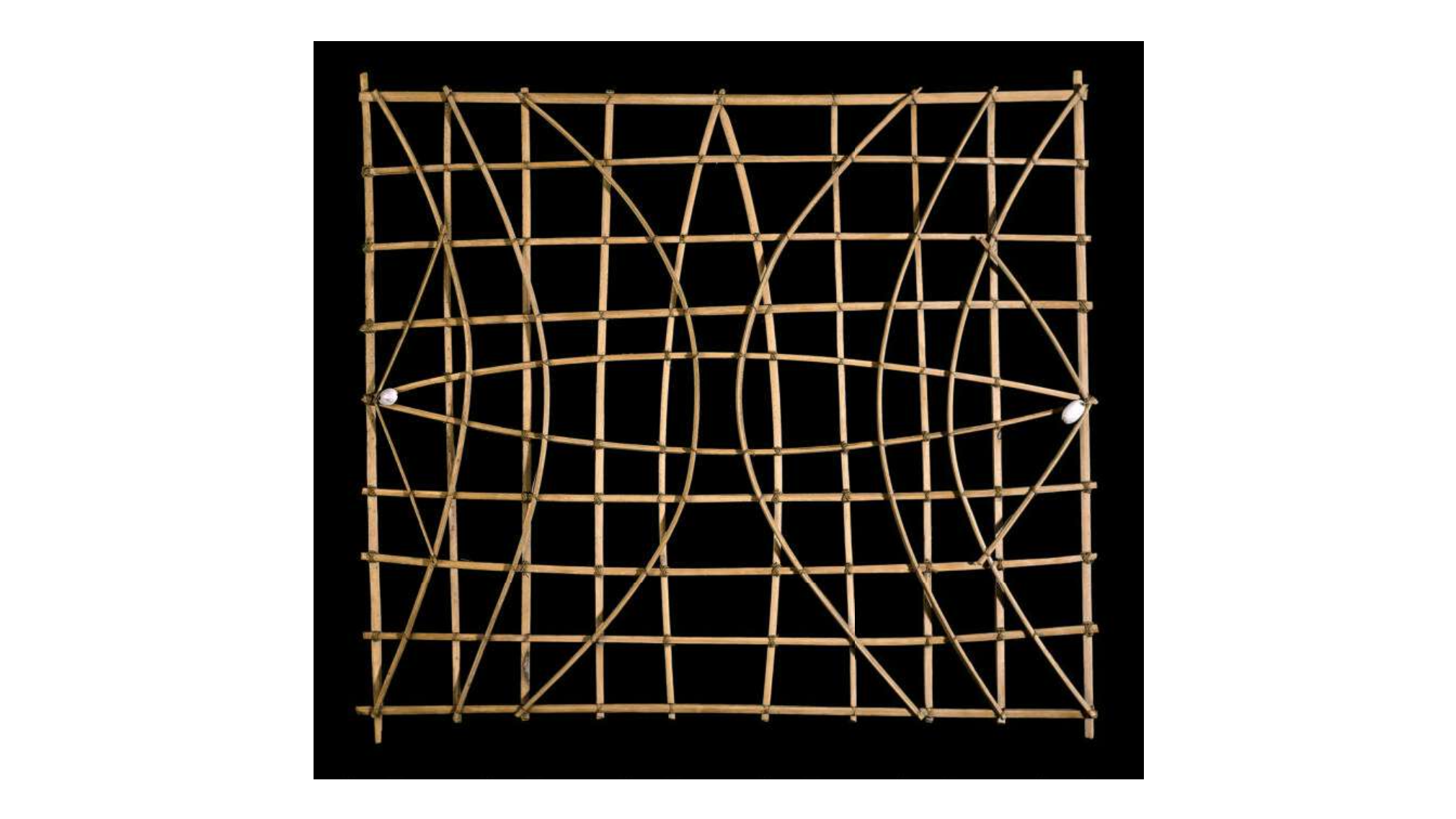 Across millennia, Pacific people voyaged out to sea and settled the ocean’s thousands islands and atolls, linking new discoveries back to existing territories. Opening and sustaining these links was fundamentally a spatial project, requiring the development, refinement, and repeated mobilization of oceanic geographic knowledge. This navigation chart, produced by a Marshall Islander whose name was not recorded, likely in the late nineteenth or early twentieth century, is a material encapsulation of the knowledge that enabled generations of these voyages.

Voyaging from island to island frequently involves sailing beyond the horizon. The Marshall Islands, for example, spread across more than six hundred miles, and each island or atoll is only visible for a few miles out to sea. Marshallese pilots navigate across open water by reading the presence of islands in the movements of waves. Specifically, they observe and interpret the ways that islands and atolls refract, reflect, and diffract wave action. As a wave approaches an island, the increasingly shallow shoreline refracts the wave, bending it around the island and changing its direction. The shoreline also reflects some energy back towards the wave’s direction of origin. Where two islands are close together, waves passing through the aperture between them will diffract, spreading out on the other side. Together, these wave movements produce distinctive oceanic patterns that indicate an island’s presence to a person trained in reading the waves, even when the island itself is hidden beyond the horizon. This particular chart is a mattang, a general representation of how waves refract around islands. In this chart, the shells represent islands, and the curved pieces represent oceanic currents. (Meddo, or sea, charts show specific islands and currents. Rebbelith charts are similar to meddo, but generally cover a wider geographic area and include less hydrographic data.) While these charts use similar display conventions, they are more personal than universal: Different chart-makers may represent the same information differently, and not all charts are equally legible to all navigators. Unlike Western charts, Marshallese charts are primarily teaching tools and are not typically used for planning a voyage or navigating while at sea. Marshallese pilots navigate by combining wave perception with other oceanic wayfinding techniques, including celestial navigation, dead reckoning, and watching for natural signs like the presence of specific plants and animals. Ultimately, these charts vividly illustrate Epeli Hauʻofa’s description of the Pacific Ocean as a "sea of islands," linked by voyages through the waters between them.
This source is part of the History of the Pacific Ocean teaching module.