These digitized maps are divided into several sections, each of which can be browsed by author, title, date, or area. The headings include “Maps of Australia,” "Maps of Victoria,” “Maps of the World,” and “Walker Collection.”

The Walker Collection comprises 136 maps, printed between 1511 and 1774, that cover Asia Minor and surrounding areas including the Mediterranean, the Middle East, and the Balkans. It is an excellent resource for students of Renaissance cartography. As the site points out, it has an added advantage in covering a part of the world that is poorly represented (particularly digitally) in the collections of Western institutions. In the teaching of world history, the Walker collection provides good material on the European representation of areas associated with the Islamic world, both in a cartographic sense as well as in the extensive decorative illustrations that mark several of the maps in this collection.

Although there is no introduction to how the site is arranged or to the collections themselves (other than a brief introduction to the Walker Collection on its home page), the site is easy to navigate. Clicking on each listed map produces an image that can be more closely examined by means of a zoom function.

There is no search function on the site for just collections, and given the large number of maps involved this is somewhat of a disadvantage. More of a problem for those wishing to use the site for teaching world history is the lack of supplementary material on the maps featured. This makes the site most useful to those who already have information from other sources on the maps, authors, regions, and time periods involved rather than allowing the site to stand on its own.

The extensive collection of maps of Melbourne and surrounding region is a particular focus of this site. It allows students to trace the expansion of a city that was among the fastest growing urban centers in the world in the second half of the 19th century. Students might consider how the geographical expansion of “Marvellous Melbourne,” as it was dubbed by contemporaries, related to conceptions of 19th-century urban space and in particular the technological innovations of the railway. This would provide a useful comparison to other similarly expanding cities in a global perspective. The Rise and Fall of Marvellous Melbourne1 is a useful companion to reading the history of the city through these maps. Equally helpful is Melbourne Street Life: The Itinerary of Our Days,2 a history that usefully combines historical analysis with an awareness of cartographic space. 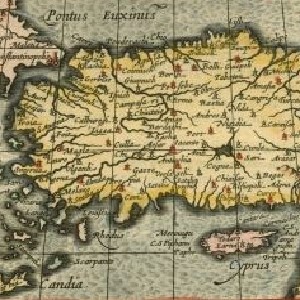 “The Walker Collection comprises 135 maps, printed between 1511 and 1774, that cover Asia Minor and surrounding areas including the Mediterranean, the Middle East, and the Balkans.”