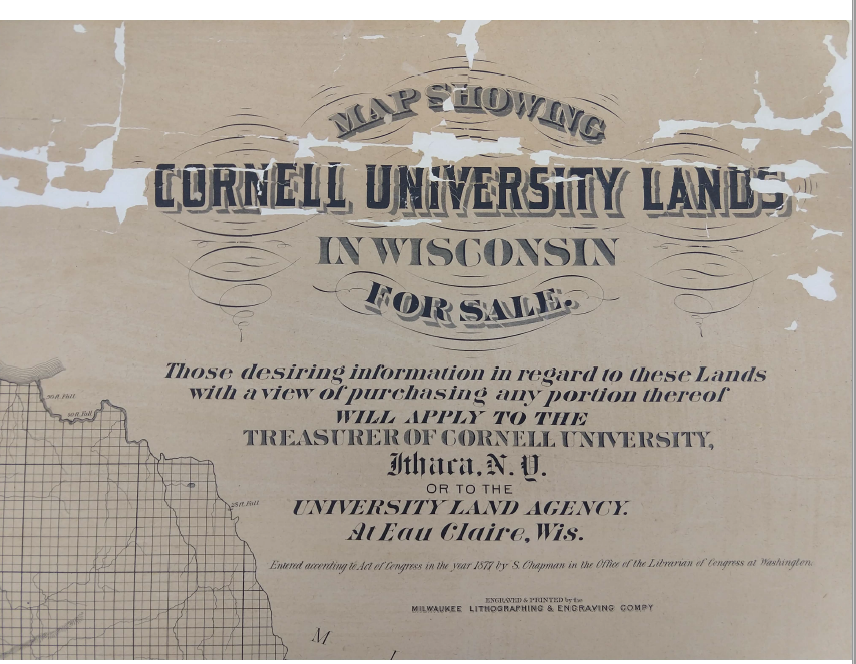 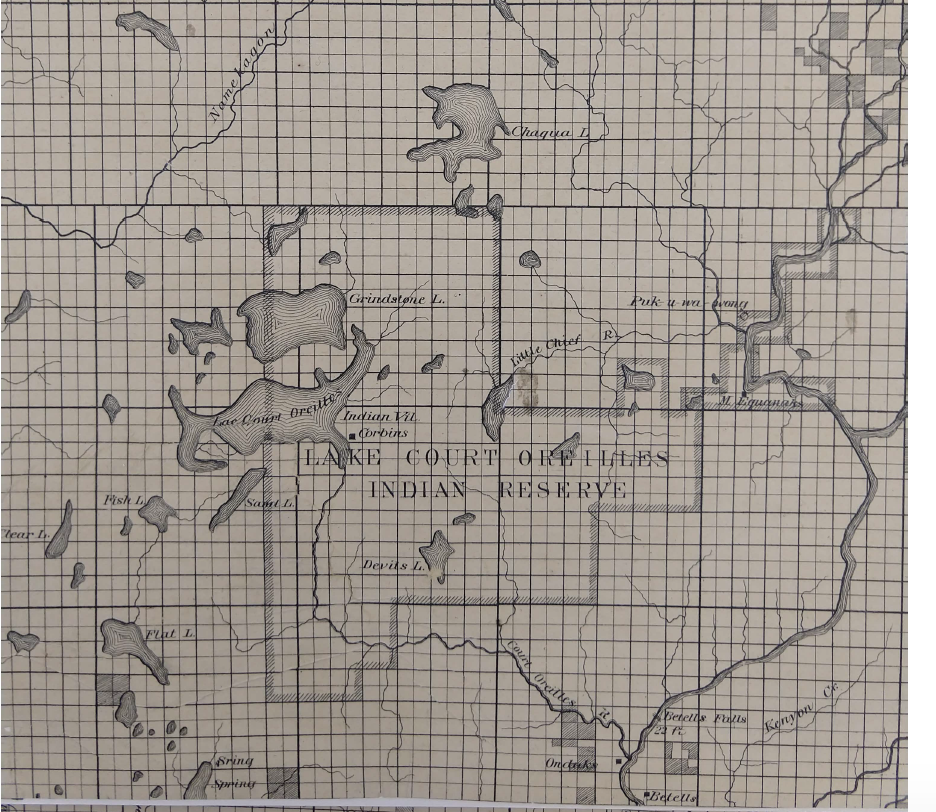 Similar to the New Zealand land grant, yet within a distinct political context, the development of land-grant universities in the United States followed and encouraged an institutional financing model based upon Indigenous land acquisition, leasing, and sale. The second map/image shows two snapshots from a “Map Showing Cornell University Lands in Wisconsin for sale”. Published in 1877, this map imposes a grid over top of the depicted timberland regions of northern Wisconsin. The title’s subtext notes that “those desiring information in regard to these Lands with a view of purchasing any portion thereof will apply to the Treasurer of Cornell University, Ithaca, N.Y. or to the University Land Agency at Eau Claire, Wis.” Much of the land shown, distant from New York, had been purchased on the institution’s behalf by Cornell’s namesake and businessman, Ezra Cornell. Under the Morrill Act of 1862, the U.S. federal government apportioned public lands to each state to fund an institution of higher learning, equivalent to “thirty thousand acres for each senator and representative in Congress” (Enrolled Acts and Resolutions of Congress 1862). Educationalists like Cornell thus exercised considerable power to select and act as stewards over federally-granted university lands.

However, as in New Zealand and elsewhere, the lands granted represented a considerable wealth transfer from Indigenous communities to universities. As the historian Bobby Lee and journalist Tristan Ahtone have recently demonstrated, the full territorial reach of America’s “land-grant universities” extended to over 11 million acres (Lee and Ahtone 2020). Cornell University alone received over 900,000 acres, one of the largest grants to a single institution in the United States. The “Cornell University Lands” map, and others like it, helped to facilitate the sale and transfer of Indigenous lands, recording plots already sold through the shading of grid-boxes and advertising others as available for sale. The proximity of these plots to the “Lake Court Oreilles Indian Reserve” features in the second snapshot. Along with the UNZ map and others like it, Cornell’s land-grant map reveals an institutional financing strategy favored by many settler educationalists. At the same time, it exposes educational institutions as one of the less-obvious mechanisms through which empires sustained their influence.

Maps of university landholding, therefore, encourage us to reconsider the history of universities in settler societies. By exploring how and why these nineteenth-century societies – from the state of New York to the provinces of New Zealand – adopted land-granting as a common university financing strategy, we can uncover a pattern of institutional development that extended beyond the nation-state, and understand the ways in which higher education institutions acted as agents of colonization and beneficiaries of Indigenous removal.

This source is part of the global history of higher education methods primer.