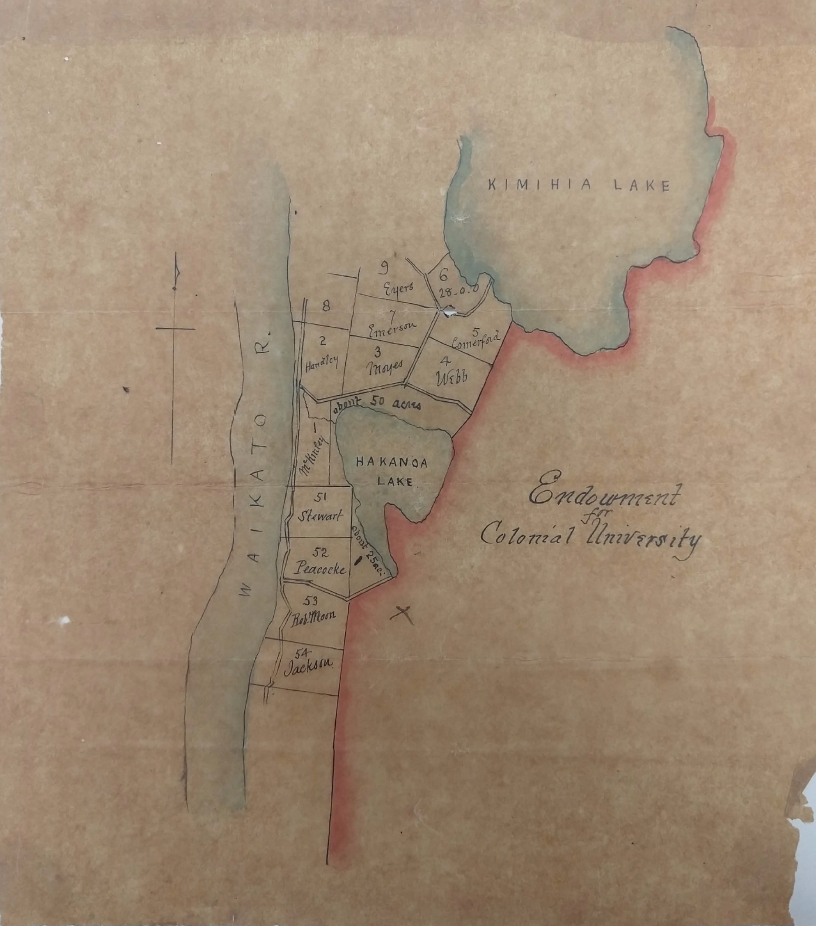 Depicting the North Island of Aotearoa New Zealand, this map outlines the lands that surround the Kimihia and Hakanoa Lakes in the Waikato Region. Small plots of land, 50 acres each, are demarcated and assigned to various landholders. Running parallel to these plots is the Waikato River, the map’s westernmost feature. Along its eastern edge are most of the demarcated plots, each one named and numbered for an intended buyer or lessee. Names such as “Jackson” or “McKinley” fill the map, creating a patchwork of named, blocked-shaped properties. But the map’s largest feature, hundreds of acres in size, is labelled “Endowment for Colonial University”. Such a substantial block of land would not only have been greater than the size of a university’s campus, but it was also located in the Waikato – hundreds of miles away from Christchurch, the principal site of the University of New Zealand (UNZ), and from any of the UNZ’s constituent colleges.

We tend to think of universities as distinctive, place-based communities. Possibly the longest-lasting myth of the “land-grant university” is that its operations existed in one place – usually the university’s host city or campus. Yet as these maps reveal, the territorial reach of early universities in Anglo-American settler societies extended far beyond their campuses. Fledgling public universities – especially in Canada, New Zealand, and the United States, but also in Australia and South Africa – received substantial blocks of expropriated Indigenous territory as financing from their governments in the nineteenth century (Harvey 2021). These lands, millions of acres altogether, could then be leased or sold to raise universities’ endowment capital.

Produced in 1873, the “New Zealand University” map was sent from the Registrar of the UNZ to the office of New Zealand’s colonial secretary. At this time, New Zealand was a British colony of settlement, having officially become a settler colony with the signing of the Treaty of Waitangi between the British Crown and Maori chiefs in 1840. New settler-governments like the one in New Zealand hoped to build churches, schools, and other social institutions to cement their connection to the lands they occupied. But they were cash poor. Accordingly, this map exposes one mechanism through which certain settler governments, including those in New Zealand, raised new institutions’ endowment capital. Land leases, mortgages, and using land as collateral for loans were not the only financing strategies of public universities, but they were significant ones.

This pattern of institutional development, furthermore, was not unique to New Zealand. Other colonies of settlement once within, or formerly within, the British Empire – especially Canada and the United States – similarly relied upon Indigenous land to fund higher education. Educationalists within these places communicated with one another, usually through letters and colonial newspapers, and compared institutional funding models. Intercolonial learning was central to the spread of this form of institutional financing. Settlers who were oceans apart faced similar challenges – from being cash-poor to attracting students – and relied upon imperial networks to surmount them. By the nineteenth century, the relationship between universities and landholding was longstanding, drawing inspiration from the land ownership practices of the universities of Oxford and Cambridge.

This source is part of the global history of higher education methods primer.