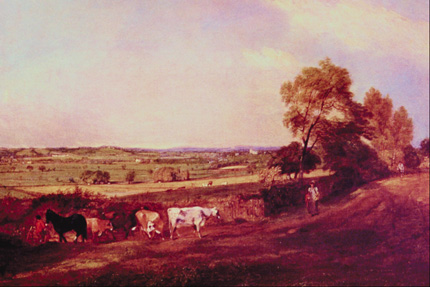 “[Instructors] might invite students to reconstruct Collins’s expectations and attitudes towards various topics, tracing perspectives that she noted as exceptional. ”

Louisa’s World presents readers with an accessible, interesting primary source document: the diary of a young Nova Scotia woman, Louisa Sarah Collins, recorded between August 1815 and January 1816. Instructors will find this an engaging and user-friendly site that presents a candid perspective of the world as seen through the eyes of an intelligent but uneducated rural woman from the early 19th-century Maritimes.

The diary contains information about the labor that Collins and other family members, friends, and acquaintances performed on the farm, how she passed her leisure time (walking, visiting, and “romping”), and on family roles and social connections. Her text allows readers to draw conclusions about Collins’ unmediated perspectives on women’s roles and on class issues, among other topics. Her diary also allows insight into customs and concerns of Collins’ community of Colin Grove: material culture, public events, the local economy, attitudes toward birth and death, and religious practice.

The original diary numbered under 25 pages, totaling approximately 8,000 words, so the primary source material available at the site is limited. However, both the journal and the context in which Collins lived are further documented at the site with eight images and 16 maps and plans (available in the “Gallery“ section), numerous biographical entries, and histories of both Collins’s family and Colin Grove, http://www.brookhousepress.ca/louisa/colgrov.htm pieced together from the diary and other sources.

The site editor has also included helpful notes on references in Collins’ text. For example, when Collins mentions “nature’s sweet restorer, balmy sleep,” readers are directed to the late 18th-century poetry of Edward Young, who obviously exerted a literary influence on Collins here and elsewhere in her text. There is also a name index with more than 300 fully cross-referenced entries. These provide biographical and genealogical information about characters Collins mentions in her diary. (The curiously unique subject topic indexed is “blacks“ – and one wonders why the site authors did not attempt to trace her discussion of other subjects in a similar manner.)

Instructors could use Collins’s journal in a number of ways. Relying on the journal alone, they might invite students to reconstruct Collins’s expectations and attitudes towards various topics, tracing perspectives that she noted as exceptional (for instance, towards race or courtship—she happily anticipates the possibility of having a “real Yankee bundle” at one point, for instance) and those that were so pedestrian they were unremarkable to her. The careful documentation in the diary’s name index presents teachers with another possible exercise: students could use the index in conjunction with the journal entries to reconstruct the social connections that Louisa recorded in her community.

Instructors might refer students to the beautifully executed example of such an historical approach in Laurel Thatcher Ulrich’s study of one woman’s 18th-century New England journal, A Midwife’s Tale, available online. Alternatively, they might use Collins’s journal in conjunction with the popular Canadian novel, Lucy Maud Montgomery’s early 20th-century Anne of Green Gables, also available online. Students could track similarities and differences between the experiences of—or influences exerted upon—Montgomery’s heroic and imaginative orphan Anne and Louisa Collins’s more materially-focused protagonist, or they might conclude what divergent perspectives on women’s lives these two very different sources present.