Liberty in the Form of the Goddess of Youth 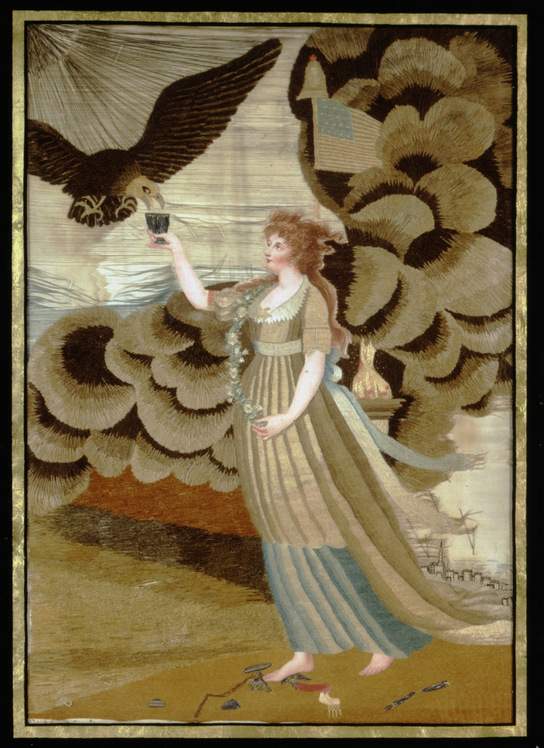 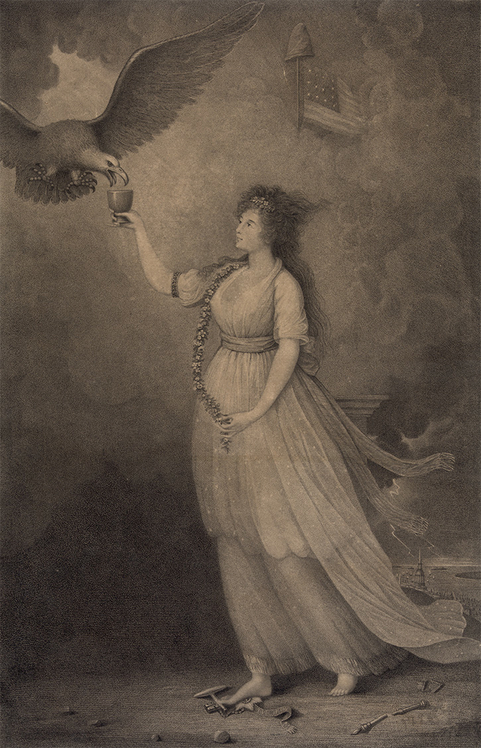 Mary Green of Worcester, MA, created this embroidery in 1804 at the age of 16. She based it on the 1796 engraving, "Liberty in the Form of the Goddess of Youth Giving Support to the Bald Eagle," by artist-entrepreneur, Edward Savage (fig. 2).

In this enormously popular allegory that celebrated nationhood in the years after the American Revolution, Liberty is portrayed as a female adolescent. Draped in a long, flowing gown, this stylized Liberty nourishes the Republic (represented by the eagle). She also treads on symbols of British oppression (e.g., the key to the Bastille on a broken chain, a scepter, and the garter of a royal order). An American flag and the Liberty Phrygian Cap float above her head. In what ways does Green's interpretation of Liberty differ from Savage's? What might account for those differences?

The representation of a youthful Liberty was not only allegorical; it also was a prescriptive message that must have resonated with girls like Mary Green. Anxieties about the future of untried democracy led contemporaries to compare the independent states to impetuous youth. In order to ensure the future of the Republic, adolescent girls were trained to fulfill their forthcoming role as "Republican Mothers" who would inculcate their children with civic virtue. The female seminaries launched at the end of the 18th century provided an unprecedented academic curriculum as well as lessons in feminine accomplishments exemplifying refinement and utility. Girls perfected their repertoire of fancy needlework skills (e.g., French and bullion knot stitch) by embroidering popular pictorials (such as this one), commemoratives, and morning art with silk floss. Girls also practiced their knowledge of geography by embroidering map samplers on ivory silk.

Mary Green, "Liberty in the Form of the Goddess of Youth [Embroidery]," 1804.

"Liberty in the Form of the Goddess of Youth," in World History Commons, https://worldhistorycommons.org/liberty-form-goddess-youth [accessed August 13, 2022]