Gender Roles among the Nahua in the Codex Mendoza 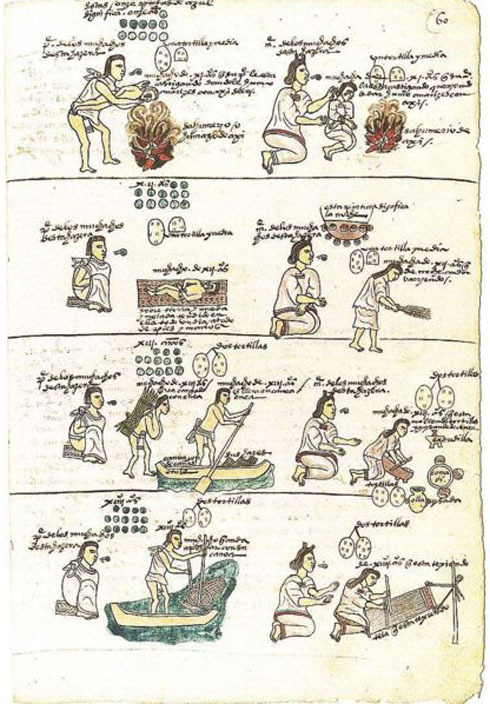 From the time of birth, children in Aztec, or Nahua, society were socialized into gender roles. In the birth ritual introducing the infant to society, symbolic objects clearly differentiated. Boys were to be warriors and craftsmen, and girls were to tend to domestic chores. Articles of clothing—loincloth and cape for the boy, shift and skirt for the girl—were given to the child. The umbilical cord of the boy was buried in a field to associate him with the battlefield; the girl’s cord was buried in a corner of the house, each space signifying the sites of social productivity. The image from the Codex Mendoza depicts ways in which childhood socialization patterns differed for boys and girls, systematically divided into panels on the left and right sides of the page, each vignette separated from the other by a line. In each scene, male and female adults preside over raising boys and girls, respectively. From infant to adult, children were classed into age-cohorts, each with its expectations. A ritual called izcalli took place every four years and involved a purification ceremony for children of that cohort in a fire with the acrid smoke from chili peppers. The image shows a small boy being held over the fire, the girl in front of it. Children were also held up by the head or neck to make them grow tall; their ears were pierced with maguey thorns for later ornaments. Other scarification rituals took place at various stages of maturity. After the age of four, children became responsible for gender-specific chores, and began to wear adult-like garments. They were socialized into patterns of speaking, showing respect, and sitting in gender-specific postures. Boys learned endurance, sleeping bound on the cold, wet ground; girls perfected sweeping rituals for purification of the house. The boy is taught to carry firewood, while the girl learns to grind maize and make tortillas. The image on the bottom shows an older boy learning to fish, and the girl weaving spun thread on a back-strap loom—both tasks that would require a child to reach a certain size and strength. These measures in early childhood may reflect brief life expectancies in which every member of the family had to contribute to the prosperity of the society.

This source is a part of the Codex Mendoza (16th c.) teaching module and the Primer: Gender in World History methods module.

"Gender Roles among the Nahua in the Codex Mendoza," in World History Commons, https://worldhistorycommons.org/gender-roles-among-nahua-codex-mendoza [accessed May 22, 2022]