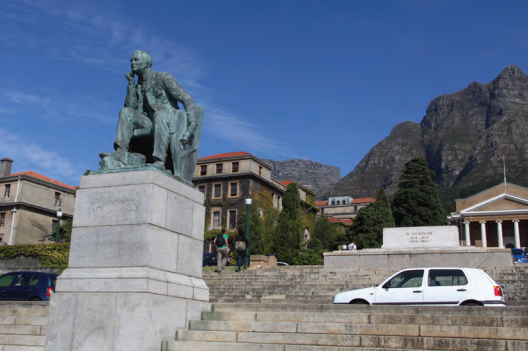 The bronze statue of a seated Cecil Rhodes (1853-1902), on the campus of the University of Cape Town (UCT), was sculpted by Marion Walgate, one of the first white female sculptors in South Africa. Walgate had earlier made a bust of Rhodes, a mining magnate and arch advocate of British imperialism, for the colonial government of Southern Rhodesia (now Zimbabwe). Walgate was the wife of an architect, Charles Walgate, who designed the UCT’s buildings, situated on land that Rhodes bequeathed to the colony. Lord Kurzon, British Viceroy of India, on a visit to South Africa, suggested the pose of Rhodes sitting on a bench. A booklet published to accompany the statue’s unveiling in 1934 stated that the sculpture showed Rhodes “seated on the bench which he caused to be erected for his own use looking over the Cape Flats towards the glorious panorama of the Hottentots Hollands mountains.” Below Rhodes’ figure were inscribed lines from a poem of Rudyard Kipling, “The Song of the Cities”: I dream my dream, by rock and heath/and pine,/Of Empire to the northward. Ay, one land/From Lion’s Head to Line!” Except for defacement by protestors of the university’s commemoration of its 150th anniversary in 1979, the Rhodes statue remained intact through both South Africa’s apartheid and early post-apartheid eras. Meanwhile, UCT became Africa’s leading university. In 2015, however, the statue was removed.