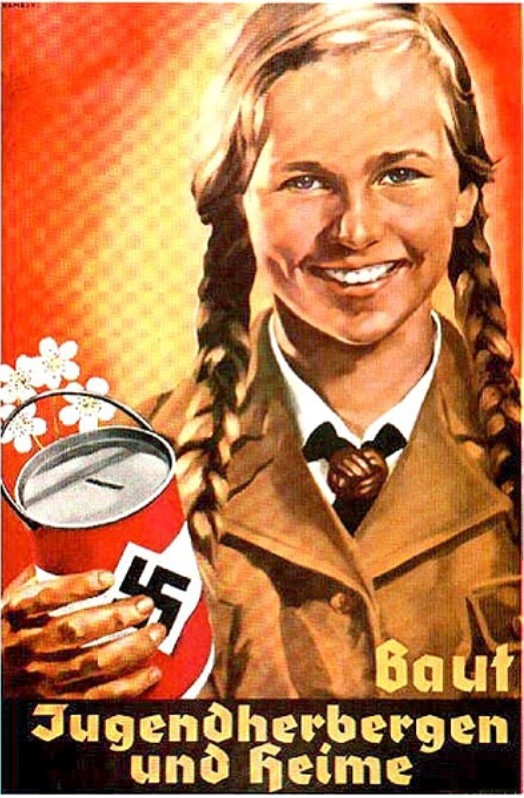 “The historical materials provide glimpses of girls' activities and appearance, and the primary source images and text illustrate the friendships among young women and girls. It also depicts the ways in which a modern state could appropriate girlhood.”

The images and documents presented on this website consist of material on Das Bund Deutscher Maedel in der Hitlerjugend, or "League of German Girls in the Hitler Youth." This organization for girls and young women was founded in the 1920s and became part of the Hitler Youth in 1932. At that time, all other scouting and religious groups were disbanded and their membership amalgamated into the BDM. While members included girls as young as 10 years of age, the site states that "Most of the League's leaders were women with completed university degrees or vocational training who were between their mid-20s and their late 30s in age." Many remained in the League until they got married, pregnant, or went to work. Another organization, Das Werk Glaube und Schoenheit, or "the Belief and Beauty Society," that became affiliated with the BDM, emphasized aesthetic movement activities, arts and crafts, fashion, home economics, and childcare.

However spare, the BDM site design is consistent and the materials are easily accessed. There are hundreds of images, significant texts of the movement, printed illustrations and drawings, and photos of artifacts. The explanatory materials, in which historian Chris Crawford has taken on a leading role, include translated personal narratives, background, and descriptions of the structure and leadership of daily and family life.

The materials were posted by a group of historians who are also re-enactors of the BDM, and state that the site represents an under-researched aspect of the period. A prominently placed disclaimer clarifies that the site does not represent a neo-Nazi position, but is intended to be historical and non-political, for the use of re-enactors and historians. One of the motivations for constructing the site is to expand understanding of the BDM beyond its association with the Hitler Youth, and the photographs, booklets, magazines, and other evidence shows this multi-faceted function. It was the only organization available for German girls, and fulfilled many associative and recreational functions. The girls went on trips, camped out, played sports, and created theatrical productions, crafts, and fashions. The photographs indicate that like those in modern girls' organizations elsewhere, many girls bonded with each other and enjoyed BDM activities.

The website notes that it differed sharply from the Hitler Youth for boys in that it did not include paramilitary training, and only awarded medical badges. The organization began much like the Girl Scouts in terms of its focus on bodily exercise, life and outdoor skills, and community activities, justifying these as a response to more sedentary contemporary lifestyles for youth in contrast to the hard work imposed on children in earlier times. The difference is that membership and participation under the National Socialist government was not voluntary, but compulsory. This quotation from the 1940 Youth Leadership pamphlet is evidence of the tone of the organization: "You, too, belong to our leader. He asks of you, and of all within our community, that we grow up to become obedient, service-minded and dutiful, and live in comradeship with those in our community. This is why you join the Jungmaedel League at the age of 10. Aside from your duties at home and in school, service in the Jungmaedel now also asks you to do your part voluntarily and joyfully."

On one level, the site illustrates German Christian girlhood under the Nazis. The historical materials provide glimpses of girls' activities and appearance, and the primary source images and text illustrate the friendships among young women and girls. It also depicts the ways in which a modern state could appropriate girlhood. A quotation from the BDM Service Manual indicates the way in which the state regimented even the most personal motivations to be healthful, beyond what might be classified as public health concerns: "Sport should not become a goal in itself with us; we do not want to break records; we perform bodily exercises in order to become happy and healthy members of the national community. 'Community and homeland solidarity' should be the motto of our bodily exercise regimen."1 A hand-written dedication in the book, which may have been the printed guidance of a high official, referred to the pleasure of selfless service to the nation. A section on the Ostdienst—work with resettled Germans in eastern Poland—as well as some images of war relief work shows the transition from relatively carefree beginnings to doing quite demanding work on behalf of the Reich. The materials are wide-ranging, from the most prosaic images of girls on outings to snapshots of girls thrust into situations that went beyond normal expectations of young womanhood, but were seen as necessary in the later years of the war.

1Maedel im Dienst: a Handbook, Issued by the Imperial Youth Command in the Hitler Youth, 1934, p. 10