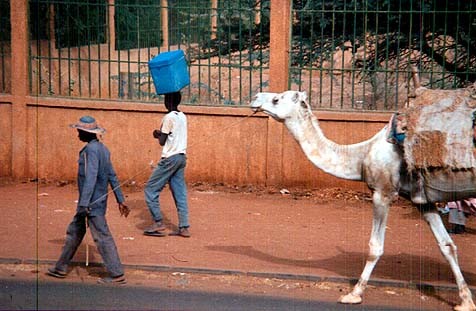 “The great strength of Africa Speaks is the honest and unfiltered voices of the Nigerien students. Rather than being described and defined by journalists, scholars, and other outsiders, they speak for themselves about the experience of growing up in a developing and politically unstable African country during the 1970s and 1980s.”

Africa Speaks: West African University Students Write About Their Lives features a collection of short autobiographical essays written by students in an English-language composition class taught by Dr. Patricia Stoll at the University of Niamey in the Niger Republic. Dr. Stoll, a Fulbright Professor of Writing and Literature, who collected, edited, and published her students' deeply personal life histories, explains that the common denominator in all their stories is the shared experience of becoming "an outsider in one's own country" through a western-style education. Written between 1990 and 1992, the letters touch on a wide range of topics related to the trials of children, adolescents, and young adults in Niger and several other African countries. These include the tensions between individualism and family obligations, gender roles, parenting, love and courtship, rural versus urban life, formal religion and folk beliefs, and most significantly, the trials and consequences of a western-style education.

The Fulbright Association-supported Africa Speaks site that went on-line in 1998 lacks the usability and polish of today's more advanced websites. The student essays are grouped into non-searchable thematically organized collections on: education, childhood, marriage, customs, family, magic and belief, teaching, politics, martyrs, town and country, trouble, heritage, letters home, life stories, and outsider. While the website's overall layout is simple but serviceable, the single spacing and dense formatting of the students' entries make them difficult to read on line. There are also seven galleries of general images featuring the geography and people of Niger. Dr. Stoll also provides a detailed account of her experiences teaching at the University of Niamey.

Despite the site's shortcomings, the great strength of Africa Speaks is the honest and unfiltered voices of the Nigerien students. Rather than being described and defined by journalists, scholars, and other outsiders, they speak for themselves about the experience of growing up in a developing and politically unstable African country during the 1970s and 1980s. Unfortunately, the website offers little guidance on how to contextualize their stories. There is no supporting information on the authors' gender, ethnicity, or regional origin apart from what can be gleaned directly from the entries. Similarly, there is not much information on the intense political upheavals that shook Niger in the early 1990s apart from the information provided by Dr. Stoll. Consequently, it will take some extra reading and research for non-specialists to use these materials. To this end, the following sources will provide a helpful starting place: Jibrin Ibrahim "Political Exclusion, Democratization and Dynamics of Ethnicity in Niger," Africa Today, 41:3 (1994), 15-39; Samuel Decalo, "The Process, Prospects and Constraints of Democratization in Africa," African Affairs, 91:362 (1992), 7-35; Samuel Decalo, Historical Dictionary of Niger, (Lanham MD: Scarecrow Press, 1997); U.S. Department of State, Background Note: Niger; University of Pennsylvania African Studies Center, Niger Page.

With additional preparation, Africa Speaks will provide teachers with some interesting possibilities for lecturing and lesson planning. The simplest but perhaps most productive assignment would be to ask students to compare and contrast their own life and schooling experiences with those of their Nigerien counterparts. Additionally, the essays in the "Magic and Belief 1" and "Customs 2" collections about the importance of rain in agrarian societies provide an opportunity to think about the origins and meanings of the folk customs that western observers often dismiss as primitive superstition. Teachers willing to undertake more detailed background reading in Nigerien history can use the stories about school strikes and general unrest in the "Politics 1" and "Martyrs 1" collections. For students, these will shed new light on how younger Nigerien generations experienced the inherent fear and optimism associated with the populist demands for reform and multi-party democracy that swept through much of sub-Saharan Africa following the end of the Cold War in the early 1990s.