Writing a Letter to Santa 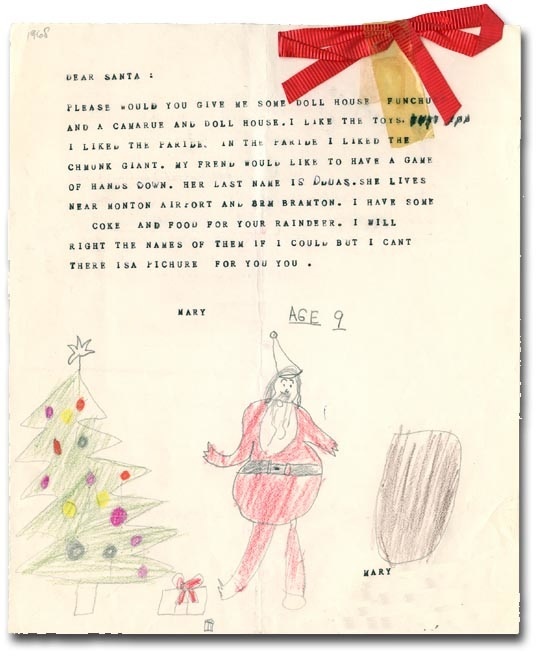 Whether known as Saint Nicholas, Sinterklaas, Father Christmas, Kris Kringle, Babbo Natale, Christkind, Père Noël, Santa Claus ("Santa") or by many other names, this legendary gift-giver in European folklore and hagiography is well known around the world.

Writing a letter to Santa is among the numerous traditions surrounding Christmas. Although in 1889, Thomas Nast—the caricaturist credited with the modern portrayal of Santa—presented Santa reading letters from the parents of children in "Santa Claus's mail," writing to Santa is as much of a children's ritual as sitting on his lap. The form of "Dear Santa letters" typically include: a testament of "nice" not "naughty" behavior, a wish-list of toys, courteous mention of Mrs. Claus and the elves, and concern for the reindeer (especially Rudolph). One study found that girls’ letters tended to be longer, more polite, and include more requests for clothing or functional items as well as more gifts for other people. Recent research studies on elementary-school children in the U.S. have found that gender-neutral toys are as popular as sex-typed toys among girls and boys.

Children in Poland, Japan, and Great Britain are allegedly the most prolific writers of letters to Santa. While sample letters are on Internet sites that also sell Santa stationery, far more common is the hand-written letter illustrated with Santas, reindeers, sleds, Christmas trees, presents, etc. Japanese children sometimes include pieces of origami with their letters. Addressed to Santa in Toyland, the North Pole, Lapland, the Arctic Circle, the town of Santa Claus, Indiana, and elsewhere in the world, children’s letters are often answered by postal workers and charity volunteers. While children in Canada use a special postal code (H0H 0H0) those in Mexico and other Latin American countries send their letters attached to helium balloons. Since the turn of the 20th century children have also sent their Santa letters to newspapers where they have been reprinted in articles.

Along with other children who live in Ontario, Mary sent her letter to Eaton’s Department store that sponsored an annual Christmas parade. In what ways is the letter 9-year-old Mary wrote to Santa in 1968 consistent with children’s practices and in what ways is it unique? What might account for the differences? In addition to gender differences do children’s letters to Santa differ according to race, class, and region? What larger purposes might this ritual serve for parents and society?