This site contains over 6,000 images selected from an archive of 52,000 photographs and slides documenting the American period in Micronesia between 1947 and 1988. It provides details on the Trust Territory Photograph Collection and links to information on the Trust Territories today, mostly in the form of government websites.

The Trust Territory of the Pacific Islands comprises three major Micronesian archipelagos in the Pacific Ocean. These groups of islands, the Marshalls, Carolines, and Marianas, came under the control of the United States as a United Nations (UN) strategic trusteeship following World War II. This was one of 11 trusteeships established across the world by the UN at this time covering areas once controlled by defeated powers.

The Trust Territory is unusual within an international context because the transitional arrangement remained in effect until 1990. The territories remain strongly tied to the United States, with the islands of the Northern Marianas designated U.S. commonwealth territory, and the other three localities (the Federated States of Micronesia, the Republic of the Marshall Islands, and the Republic Of Palau) in compacts of “free association” with the United States, which controls their defense.

Images are presented in thumbnail size alongside a brief caption. Clicking on the thumbnail opens a larger image. The collection is organized according to the original archival microfilm reels. There are two ways to navigate the collection. Users can either conduct a keyword search of the photograph description or browse the collection by reel. Given the vast size of the collection, keyword searching is recommended. The layout is generally good, although keyword searches that produce long lists of images can make matching the caption to the image difficult.

The images in the collection are an extensive record of American views of Micronesian peoples, society, and culture and of the interaction between the United States and the Trust Territories. The photographs were mostly taken by those either employed by the government or closely associated with it. While the photographs are extremely diverse, a sense of the focus of the collection can be gained by the "Subject" tags including a range of political, social, and cultural categories. The disadvantage of this function is the lack of any caption to identify or contextualize the photographs, rendering images for political leaders, for example, largely meaningless for anyone not familiar with the politics of the region.

Scholarly interest in the issue of imperialism with reference to the United States has paid less attention to the question of Micronesia than to other locations, such as the Philippines. The advantage of this site is that it provides extensive primary sources related to this issue. For students of world history it provides a visual record of cultural contact in a situation of quasi-colonialism that continued well into the 20th century. In this regard, Robert Aldrich and John Connell, The Last Colonies1 is a particularly useful companion to the site for teachers of world history interested in using it in this way. Aldrich and Connell situate Micronesia within a global discussion of territories formally dependent upon metropolitan powers.

The website’s main disadvantage it that it lacks extensive scholarly discussion to contextualize the images. Given the relative unfamiliarity of many students with this topic and region, teachers may find the following resources useful: Gary Smith, Micronesia: Decolonisation and U.S. Military Interests in the Trust Territory of the Pacific Islands takes a geopolitical perspective and argues that U.S. control over the islands of Micronesia “was the strategic equivalent to the Soviet Union’s control over Eastern Europe.”2 For Smith, local demands for self-determination were sacrificed to U.S. strategic and defense interests. Francis X. Hezel’s The New Shape of Old Island Cultures: A Half Century of Social Change in Micronesia3 explores social history more broadly, is focused on the same period as the site, and makes extensive use of the Photographic Archive. 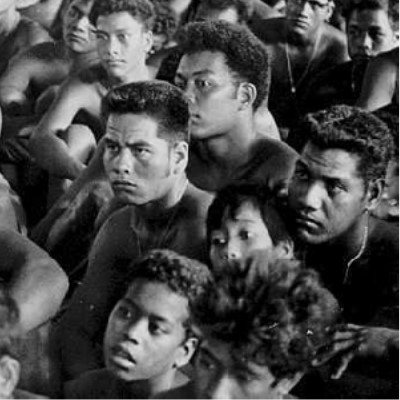 “The images in the collection are an extensive record of American views of Micronesian peoples, society, and culture and of the interaction between the United States and the Trust Territories.”