This website is intended to provide primary material about the dispute over Taiwan. Links on the left-hand side of the home page make navigation fairly easy. These links include: “Documents”; “Related Topics”; “Papers”; and “Maps.” A search engine allows full-text searches of the entire site. By far, the most useful portions are the sections with documents and papers as well as the “Bibliography.”

“Documents,” the core of the site, provides more than 150 English-language primary materials organized into the following categories: (a) Treaties; (b) Japanese Surrender Documents; (c) Conference Declarations; (d) Joint Communiqués; (e) United States Laws; (f) U.S. Legislative Activities; (g) United Nations (UN) Documents; (h) Law of Treaties; and (i) Other Documents. The 22 documents in “Treaties” range from an agreement signed between Koxinga and the Dutch in 1662 to a Treaty of Peace and Friendship between Japan and the People’s Republic of China in 1978.

Japan looms large in the international status of Taiwan. Overrepresented are treaties that emerged from the first Sino-Japanese War (1894-1895) as well as agreements dating from the early 1950s, mostly related to the U.S.-Japan Security Treaty (a.k.a. The San Francisco Treaty). The 10 “Japanese Surrender Documents” cover the Japanese surrender to Allied powers in 1945.

“Conference Declarations” contains full versions of the Cairo (1943), Yalta (1945), and Potsdam (1945) Declarations issued by the Allied powers during World War II. The Joint Communiqués include a security agreement between the United States and the Republic of China (ROC) on Taiwan (1954) as well as a number of diplomatic documents signed during the earliest years of U.S.-PRC normalization (1972, 1979, 1982) which form the basis of the U.S. recognition of the “one-China policy.” Also worthy of note are 13 UN documents including the Charter of the United Nations (1945), the Universal Declaration of Human Rights (1948), Resolutions on the Representation of China at the UN (1970), and official proposals for the General Assembly to study the participation of the ROC (1999-2001).

One important caveat: the dominant outlook presented in the “Executive Summary” of the site clearly favors the cause of Taiwanese independence. This, in and of itself, is not a problem; however, it belies the authors’ claim to be a “non-partisan entity” interested in presenting objective information. Nevertheless, many of the documents provided are of some historical value as primary sources, but are perhaps best viewed in conjunction with other interpretive perspectives. Beyond the fact that the Taiwan Documents Project is a “privately funded, non-partisan entity” based in Los Angeles, it is difficult to identify site authors precisely. This reviewer was left with the impression that the information here is aimed at U.S. legislators and policymakers.

Having said this, the international status of Taiwan is a wonderful case study of a number of global and world historical themes, including: the expansion of American power into the Pacific; the formulation of Cold War and post-Cold War policies in Asia; Japan’s role as a colonizing power in the early 20th century and as an American client in the Cold War era; and issues of decolonization and emergent nationalism in Taiwan. This site can also be used to study an ongoing effort to construct a national identity and international legitimacy. From this perspective, the site may be pedagogically useful. In other words, this site seems most valuable not as an unbiased repository of information, but rather as part of the movement for Taiwanese independence and more generally as a historical case study in the politics of national identity.

All of these issues may be addressed in the classroom by looking at the Taiwan issue. Questions that might be posed to students include: What determines the existence of a “nation”? What are the bases of “self-determination” (a Wilsonian ideal dating from World War I)? Documents on this site might be used in conjunction with a PBS/Frontline documentary entitled Dangerous Straits (2001), which explores the Taiwanese Straits issue in the post-September 11 world. 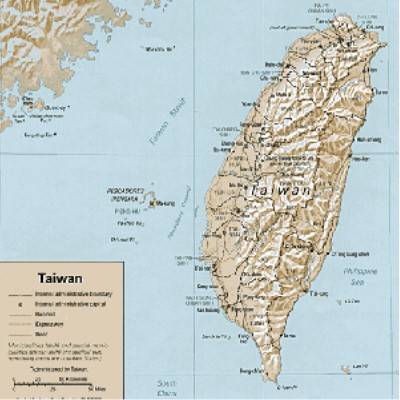 “This site seems most valuable not as an unbiased repository of information, but rather as part of the movement for Taiwanese independence and more generally as a historical case study in the politics of national identity.”