Puerto Rico at the Dawn of the Modern Age

This site commemorates the Spanish-American War of 1898 that ended Spanish colonial rule in Puerto Rico, Cuba, and the Philippines, and began U.S. control of these areas. It contains 39 pamphlets, 13 books, and one journal, all published between 1831 and 1929. Texts include general histories, discussions of political and economic issues, and personal memoirs. Articles by Marisabel Brás, a Senior Analyst at the Department of Defense and a former university professor in Puerto Rico, provide an overview of the island’s 19th- and 20th-century history, its relationship with the United States, and a discussion of Puerto Rican national identity. Seventeen maps from the 18th to the 20th centuries depict the West Indies, Puerto Rico, some Puerto Rican cities, and the Spanish-American War. Most of the written sources are in Spanish with four books in English. Written sources are accompanied by summaries in English that either describe the collection they are drawn from (for pamphlets) or describe the document (for books and the journal). Texts are available in facsimile or transcribed, searchable form. There are links to nine related collections and classroom activities.

The site is well organized and easy to navigate. Users can search the texts by keyword or browse the subject, title, and author indexes. Instructions guide users in downloading maps. Most of the written documents are in Spanish, although the website and text summaries are in English. People unfamiliar with the history of Puerto Rico and the 1898 war can consult the Brás essays.

These materials introduce students to 19th- and 20th-century Puerto Rican history and the 1898 war through primary sources. One of the English books is A Little Journey to Puerto Rico for Intermediate and Upper Grades (1900) written by Marian M. George for U.S. schoolchildren. Students could compare this to their own textbooks, the website essays, and other texts on the site, and analyze how history is written for different audiences in different periods. How did George present Puerto Ricans, their culture, and the role of the United States on the island? How was this message conveyed in written text and pictorial images (the book begins with an image of the U.S. flag entitled “The Star-Spangled Banner – Puerto Rico’s Flag”)? Bilingual students could compare this with the 19th-century Historia Geográfica, Civil y Natural de la Isla de San Juan Bautista de Puerto-Rico (originally published in 1782, the annotated edition here was published in 1866) by Iñigo Abbad y Lasierra, a Spanish priest. How did the ideas of an 18th-century Spanish Catholic differ from the postwar U.S. perspective? Students who only read English could compare the 1900 text with The History of Puerto Rico from the Spanish Discovery to the American Occupation (1903), a scholarly account by R. A. Van Middeldyk. How was the history of Puerto Rico presented to different audiences in the United States? This website allows students to examine the way that written texts are products of particular historical contexts.

"Puerto Rico at the Dawn of the Modern Age," in in World History Commons, https://worldhistorycommons.org/puerto-rico-dawn-modern-age [accessed January 17, 2022] 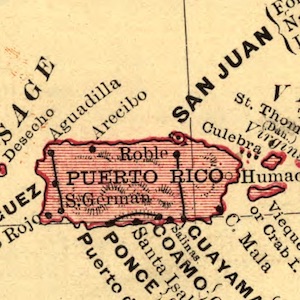 “This site commemorates the Spanish-American War of 1898 that ended Spanish colonial rule in Puerto Rico, Cuba, and the Philippines, and began U.S. control of these areas. ”