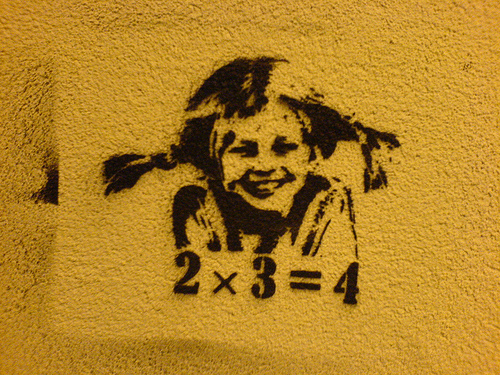 This image found on a wall around the University of Vienna and the Austrian Parliament, in 2008, is a graffiti stencil of Pippi Longstocking, the eponymous fictional character created by the Swedish children's book author, Astrid Lindgren, in 1945. Since then, Pippi Långstrump (in Swedish) has been translated into 90 languages and made into movies and TV series. The image here is based on the portrayal of Pippi by Inger Nilsson, the 9-year-old actress who starred in a 1968 Swedish TV series. Dubbed versions were shown on German TV in 1971 and in the U.S. by 1973 where they became enormously popular.

Though she is known by other names around the world ("Harisnyás Pippi" in Hungarian), Pippi is an iconic figure whose gravity defying red braids, oversized shoes, mismatched socks, home-made clothing, and freckled face represent her playful and plucky world view.

Pippi is an independent, unconventional, anti-authoritarian 9-year-old rebel who lives alone in a villa she shares with her monkey and horse. Although she is a perpetual outsider, Pippi is an advocate for the rights of children, generous with her wealth (though unmaterialistic), and a critic of unquestioned adult authority. She is enormously strong (lifting a horse and flinging policemen) and has a great sense of humor. The self-educated Pippi challenges the status quo by contesting language, logic, and principles as expressed here with her creative answer to the math problem: "2 x 3 = 4."

Illegally stenciled onto a wall in a public space, this graffitied image of Pippi expresses the subversive principles and practices of young adults who have made this "anti-Shirley Temple" into a poster child of the counter culture. As the quintessential gender bender, Pippi is especially beloved by girls and women. But not all: some see her as a poor role model for children.