Photo Library of the French School of Asian Studies

Containing digital copies of some of the over 180,000 images captured over the long history of the École Française d’Extrême-Orient (EFEO), the Photo Library of the French School of Asian Studies represents an invaluable collection of photographic material of various parts of Asia. The EFEO has long been one of the leading centres of architectural, archaeological, epigraphic, ethnographic, and art historical research on Asia and this effort to digitise their extensive collection of photographs offers scholars and the public a new lens with which they can view a visually striking and rich region.

Within its holdings, the EFEO’s Photo Library contains—reflecting changing technologies and photographic techniques—a kaleidoscopic range of photographs including stereoscopic silver bromide-gelatine glass negatives, slides, silver and colour prints, and digital images. Reflecting the EFEO’s origins as a French colonial institution, the collection predominantly contains visual material from Cambodia, Vietnam, and Laos when all three constituted the French colony of Indochina but also has substantial holdings on India, China, Sri Lanka, Indonesia, Myanmar, and Thailand. The website is easy to navigate and consists of an introductory page and visitors can browse the available images either by performing a keyword search in the site’s search engine or going through curated collections organised by country or by prominent EFEO scholars. In addition to the images themselves, the Photo Library also offers six virtual exhibitions on: Khmer temples in Thailand and Cambodia; the Laotian city of Luang Prabang (which was once the capital of Laos); the Naxi people of China who reside in the mountains bordering Yunnan, Sichuan, and Tibet; the work of ethnographer Charles Archaimbault; the role and significance of water in Indian society; the EFEO’s collection of Indonesian photographs; and an ongoing project collecting visual documentation of China, Korea, and Japan.

One major highlight of the photo library is the Bernard-Philippe Groslier collection which contains 4,155 images captured by Groslier, the legendary French archaeologist who served as the Curator of Angkor Monuments from 1960 to 1975, conserving the remnants of the Khmer Empire as well as painstakingly cataloguing and photographing the ancient city of Angkor and its temples, which contributed significantly to modern understandings of the Khmer Empire. Another collection of interest is the Vietnam collection consisting of an eclectic mix of photographs of excavated archaeological material, landscapes, maps, blueprints, sketches, and candid images of French colonial society in Vietnam. Instructors can use these photographs to provide students with a glimpse of archaeology in action and for higher-level discussions, problematise these projects through the lens of colonialism.

The only major negative with the Photo Library is that it might perhaps be difficult to navigate for those unable to read and write in French. Although there is an option for an English version, outside of the front page, the website really only translates the section titles with the body of the text remaining in French. Moreover, the search function is also in French which means keyword searching requires more than just basic French, particularly if visitors to the site are attempting to locate something specific.

Aside from the issue of language, the EFEO Photo Library represents a great addition to the growing number of image collections available online. With the collection constantly growing as photographs from the physical collection continue to be digitised, it represents a wonderful initiative for making the visual archives of one of the major centres of research on Asia available to a global audience. 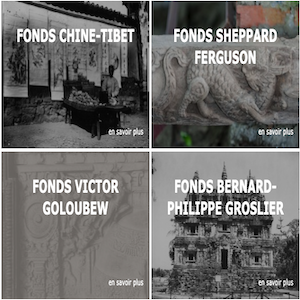 “The EFEO has long been one of the leading centres of architectural, archaeological, epigraphic, ethnographic, and art historical research on Asia and this effort to digitise their extensive collection of photographs offers scholars and the public a new lens with which they can view a visually striking and rich region. ”