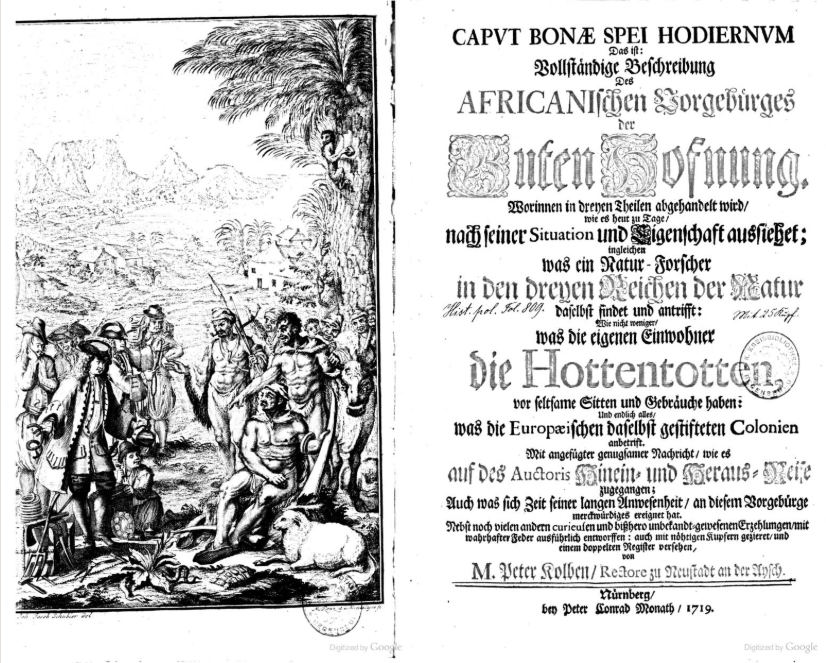 Peter Kolb was a German astronomer and mathematician who lived at the Cape from 1705 to 1713. He was initially sponsored by a German baron to make astronomical observations in pursuit of a way to calculate longitude accurately. When this project ended, Kolb stayed at the Cape and observed everything else. About three years after his return to Germany, he began to compile a book about his experiences, based on letters and notes he had written. This book (more than 850 large pages) was divided into three sections: the first discussed the flora, fauna, minerals, water, and topography of the Cape. The second addressed the social life and customs of the Khoikhoi (then known as Hottentots). The third discussed the political intrigues of the Dutch colony during the years Kolb was part of it. His ethnographic conclusions are now contested, but there is no doubt that his book is an important source for understanding interaction among the various ethnic groups at the Cape in this early period. Although Kolb was not married and had no children, he made numerous comments about many different aspects of women’s lives. In the excerpt below, he discusses the rearing of children, but also offers a glimpse into how closely Europeans, Khoikhoi, and slaves lived and worked together.