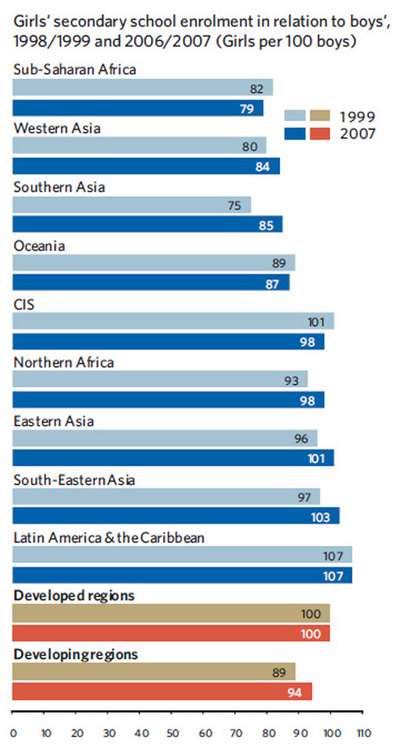 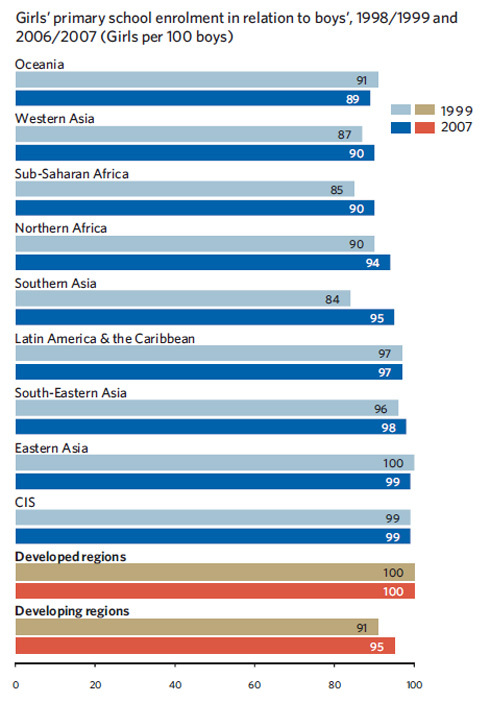 Compared with a century ago or more when female education was rare, girls' access to education has improved dramatically. The charts measure gender parity by the number of girls enrolled in school per 100 boys. A figure of 100 represents a 1:1 ratio, or parity. Three regions—Southeastern Asia, Eastern Asia, and the Commonwealth of Independent States (CIS) are near parity in primary education, and all but Oceania (Micronesia, Melanesia and Polynesia) are at 90% of parity or better. Developed countries are at parity, while aggregate data for developing countries shows 95% of parity.

The second chart presents a picture of weaker gender parity in secondary education, or grades 6-12: slight losses in Sub-Saharan Africa, Oceania and the CIS, and significant gains in Western and Southern Asia, and Northern Africa. During the period between 1999 and 2007, girls in Eastern Asia, Southeastern Asia, and Latin America and the Caribbean exceeded boys in secondary education enrollment. Aggregate data for developing countries shows that the goal of parity in secondary education, though improving slowly, is within reach at 94%, though Sub-Saharan Africa, Western and Southern Asia, and Oceania must bridge a gap of between 13 and 21 percentage points to achieve parity. The statistics for girls' secondary education have negative implications for the future of gender parity or better in higher education in the next age cohort, or age group, preparing for higher education in the coming years.

Education of girls is viewed as a priority because it has been shown to affect many other areas of human welfare. Statistics have shown correlations between education of mothers and infant mortality, improvements in child nutrition and sanitation, delayed marriage, and predictors of school enrolment and success for the next generation.